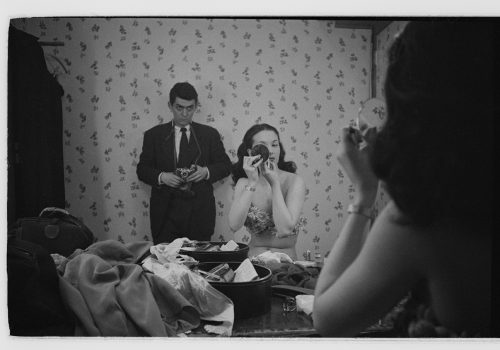 Before becoming a world-famous director of films such as 2001: A Space Odyssey and A Clockwork Orange, Stanley Kubrick started his career as a photographer. Between the age of 17 and 22, through still photography, Kubrick learnt the art of framing, composition and lighting, his main subject being his hometown, New York. His first photograph was published in 1945 by the famous illustrated magazine Look, of which he had joined the ranks five years before the making of his first short film. The young Kubrick roamed the streets of New York, camera in hand, documenting post-war America. It was not so much formal research that interested him but street photography, observing the real world and people in particular. Back in the day, there was no better place for a young photographer to work than the American illustrated press. Photography, which was quickly developing in magazines, was the medium by excellence to\ represent the contemporary world and its latest events. Kubrick was hired by Look in 1946 as an apprentice, after having sold them some of his photographs. At just 17 years old, he was the magazine’s youngest photographer and was first entrusted with small projects. The teenager completed his education at Look under the watchful eye of his new mentors, his fellow photographers and the magazine’s editors who gave him the opportunity of photographing all aspects of New York City.

Commissions quickly followed and Kubrick worked on increasingly significant photographic projects. Look sent him to various places: nightclubs, stadiums but also to television and radio studios. The magazine asked him to cover a wide variety of topics. Kubrick photographed celebrities as well as shoe shiners. He was interested in all aspects of New York life — a boisterous and theatrical world. On its streets, workers and socialites rubbed shoulders, he documented everyday life such as traveling on the subway, but also the unsavoury\side of New York. Sometimes Kubrick even strayed from the editorial line, giving free rein to his taste for the eccentric and the quirky. During his five years at Look magazine, Kubrick learned to see life through a camera lens, he observed human interactions, developed stories through images and learned to work as a team. This experience helped him build his vision and proved particularly useful when he decided to embark on a career as a filmmaker.

After working on several documentaries without making a profit, Kubrick realised that if he wanted to make a career in film, he had to switch to fiction. He resigned from Look in 1950 and his first feature film, Fear and Desire was released three years later. Twelve iconic films followed, from Paths of Glory (1957) to Eyes Wide Shut (1999) his last feature film. He also directed Spartacus (1960), Lolita (1962), The Shining (1980) and Full Metal Jacket (1987).

At the age of 22, after capturing New York City with his camera, Stanley Kubrick (United States, 1928-1999) turned to film, a medium in which he has shown an interest in recent years. Stanley Kubrick then directed a few short films in the form of documentaries. In 1953, he released his first feature film entitled Fear and Desire, followed a year later by Killer’s Kiss, which has the distinction of being the only original screenplay written by Stanley Kubrick himself. Following his meeting with the producer James B. Harris, the American director entered the Hollywood film industry and signed The Killing in 1956, the first success of a long series of productions that became cult films. His career, which spanned almost fifty years, included thirteen films, which won eight Oscar awards and fourteen nominations. Among his greatest successes are Spartacus (1960), 2001: A Space Odyssey (1968), Orange mécanique (1971), Barry Lyndon (1975), and The Shining (1979). Stanley Kubrick’s cinema will never forget any of his early years in photography, as evidenced by the ingenuity of his directing. His aesthetics, combined with daring and provocative themes, raised the New York director to the rank of a major figure in 20th-century cinema.