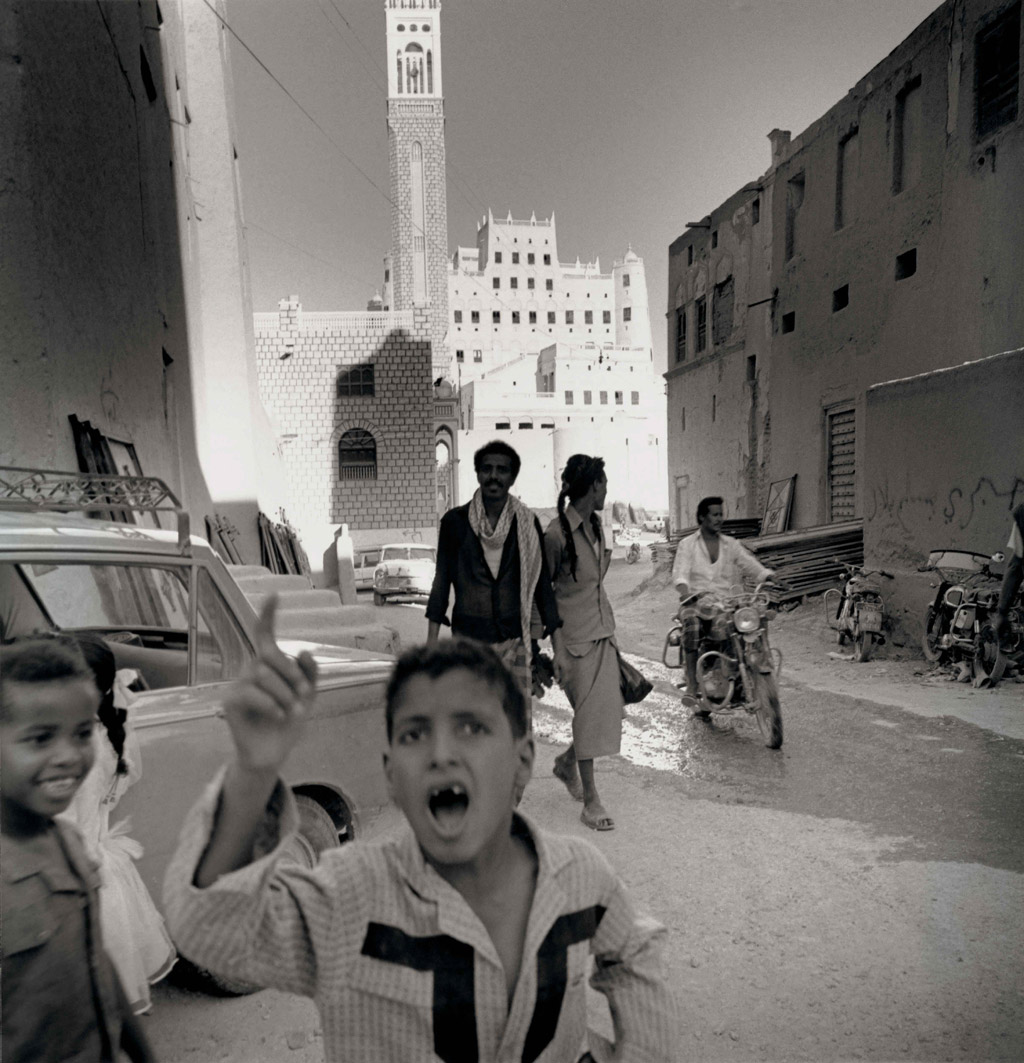 Super Tourist, Max Pam recently exhibited his collection of images from his trip though Yemen in the late 1990’s at East Wing in Dubai. Working exclusively in black and white and utilizing a square format, Pam translated his exploration and experiences into a series of images and diary entries, reflecting his distinctive style: a layering of words and images.

Pam travelled across the country, sharing in the everyday lives of its people from the capital, Sanaa, to Shibam, Taizz, and Al Mukallah; then through the desert, along the country’s coastline and up into its mountain regions, returning with an intimate journal reflecting on his experiences. The additional layers of ephemeral material and writing creates a record of a very specific moment in time, giving an in-depth insight into his creative processes; “…Because a lot of things you can’t photograph, but you can draw and write about… they are important to me; those other ways of defining experience.”

Born in 1949, Max Pam grew up in post war, suburban Melbourne in Australia. During his teen years he found himself drawn into the counter culture of surfing and was intrigued by the imagery in National Geographic and Surfer magazines, which planted wanderlust for travel that would fuel his future artistic vision.

Leaving Australia at the age of 20, Pam worked as a photographer, assisting an astrophysicist; they drove from Calcutta to London in the early 1970’s. From then until now, his in-depth, personal travel experiences have formed his artistic vision. Pam is storyteller par excellence. His carnets de voyage takes a fresh look at the countries he visits through his distinctive vision.
Pam describes the act of photographing as “… a totally beautiful invitation to jump headlong into something unknown and inviting..”

Max Pam’s works have been published in leading international journals and are included in major public and private collections in Australia, Great Britain, France and Japan. He currently teaches photo-media at Edith Cowan University, Perth, Western Australia. He says about Ramadam in Yemen: “What could I say about Yemen that did it justice. I tried in my journals to work it honestly… that hot, spare and beautiful Ramadan… The faithful waiting for the moment. The cannon booms from the mosque in the afterglow of the day. KABOOMMMM and the frenzy of quat buying, tea drinking and food eating begins at the suqs and squares and oases and towns all over the country. Everyone happy, elated, laughing and joking, sitting down together as one nation… People always wanted me to share and be a part of their Ramadan, their community, their Yemen…That unforgettable Ramadan month. An experience freely given to me by the generosity of the Yemeni people.”

Ramdam in Yemen is also a book published by Editions Bessard (http://www.editionsbessard.com)

The exhibition of Ramadam in Yemen has just completed at East Wing, but you can see upcoming exhibitions of Max’s work at:

The 10th Edition of the Angkor Photo Festival in Siem Reap, Cambodia (http://angkor-photo.com) from the 29 of November to 6 December, where he will exhibit “Kailash” a journal reflecting on his trip to Tibet in 1999.

“The Sea of Love” will be exhibited at Si Fest/the Savignano Photography Festival from 3 – 5 October (http://sifest.net).
This is Max Pam’s most recent body of work, which was commissioned at Savignano last year focusing on the Adriatic Coast.

See more about Max Pam on his website at: http://www.maxpam.com