Masterpieces from the Walther Collection # 2: “Nothing Stops Me! “ 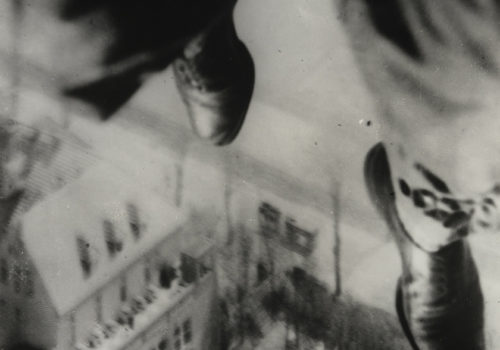 (2/5) Throughout the duration of the exhibition at the Jeu de Paume in Paris of the exceptional Walther collection bequeathed to Moma, L’Œil de la Photographie focuses on one masterpiece in particular. Today, vertigo announced.

It’s not that old, come to think of it. The parachute was just over a century old at the time. The first human jump took place in 1797 with André-Jacques Garnerin from an airship 915 meters above Paris. Soon after, his wife and niece would become the first two balloonists in history, showing that jumping with strings and a cloth is really not just for men.

Let’s go back to the photographer of the shot, Willi Ruge. In 1931, after the First World War, the first war that used military aviation, he had fun composing funny self-portraits in a parachute. This one is undoubtedly the most poetic, making believe in a montage or a composition by the painter Magritte, where, without seeing that there is a parachute, we could believe that a man walks on the world as if he had become a giant in boots contemplating ridiculous constructions.

In the multitude of experiments that emerged in the field of photography during the first part of the twentieth century, it was still necessary to think about it. Even if the “view from above” is gradually appearing in the arts (see on this subject the exhibition at the Center Pompidou Metz a few years ago), this shot must have been difficult. It is all the more remarkable and gives a feeling of freedom, a human being becoming Icarus for a few moments, their feet freed from the ground, without necessarily suspecting that, in a few years, many, like him, would fall from the sky in such a way in the storms of World War II.