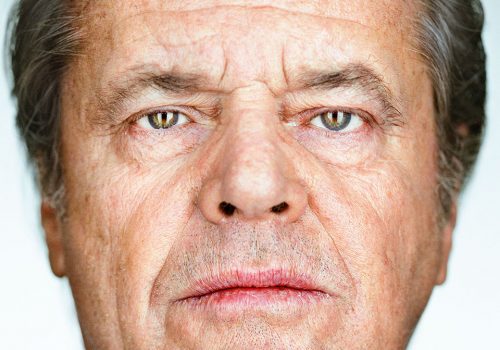 The challenge for portrait photography is to provide a meaningful response to the question that lies behind our interest in the faces of people. We look to the face – and that includes our own – provoked by simple but profound curiosity about the person being looked at, searching for at least a clue to their nature, their soul, recognition of their unique being.

Martin Schoeller in Works: 1999-2019 and Göran Gnaudschun in Are You Happy? rise to the challenge with the quest for the elusive nature of identity that may be revealed or hidden in the human face.

Brandishing kudos and well-connectedness goes most of the way for getting up close to faces of famous stars and this has granted Schoeller access to A-list Hollywood celebrities. Throw in mega-famous individuals as different as Angela Merkel, Lionel Messi and Mark Zuckerberg and you have a paparazzo’s impressive portfolio of clients.

But celebrities know the game and experience has tutored many of them to the nth degree in the art of not giving anything away except their fame and PR image; like landscapes without weather. So we see Bill Murray’s impish head peeping out from a curtain; Tarantino in a straightjacket on a hospital trolley amidst a flurry of white birds; Elon Musk looking like a whizz-kid inventor; George Clooney and Brad Pitt playing together at being players. More interesting are his glamour-less close-ups of Denzel Washington, Helen Mirren and Jack Nicholson where you can look into their eyes, sense their age and accept their right to interrogatingly return the look. There’s weather in them.

Schoeller aspires to be more than another Annie Leibovitz (he worked once as her first assistant, in charge of lighting) and he brings his talent to portrayals of individuals in very different walks of life. Works: 1999-2019 includes examples from his female bodybuilders series – bizarre bodies with physiologies that, for the viewer at least, lie on the other side of the comfort zone; trans women; flamboyantly attired drag queens; uncanny identical twins; and men and women exonerated before their death penalties in the US were carried out, like blue-capped Kwame Ajamu sentenced when he was just 17 for a crime he did not commit and only released after 39 years in prison.

Schoeller has cornered the market with his extreme close-up portraits and at his best they compel attention for their concentrated focus on a narrow visual field. The face becomes the pose and, from skin complexion to the gaze of the eyes, we cannot help but stare at moments of selfhood.

The portraits in Göran Gnaudschun’s Are You Happy? result from a different approach, situating his subjects in a place and a social context that add meaning to their faces. They are photographed in the area where they live and work, a non-touristy suburb around a section of the old Roman road, Via Prenestina, now scarred by cheaply built tenement blocks, high-rise complexes and undeveloped wasteland. Gnaudschun immersed himself in this urban space during his residency at the German Academy in Villa Massimo and the resulting book has a unity of purpose and of expression. Portraits of people share the book’s pages with images of their built environment which become part of their appearance in the world.

The people he photographs, not famous or distinguished, choose their own poses and hints of inner being behind faces are revealed in peripheral ways, at a tangent. In a way that is hard to pin down, the portraits’ silent eloquence point to the ethical import that French philosopher Emmanuel Levinas brings to face-to-face encounters. His talk of the call of the other person in their face, the unspoken claim for unconditional responsibility between people, finds expression in the defencelessness, vulnerability and human precariousness that Gnaudschun manages to catch. This is different to what is more like a demand to be looked at in the faces of Schoeller’s faces. And it’s a far cry from some of Schoeller’s posed shots, like the antic one of Jeff Koons adorning the front cover of his book.

Are You Happy?, by Göran Gnaudschun, is published by Distanz