Martin Schoeller –Behind the Mask 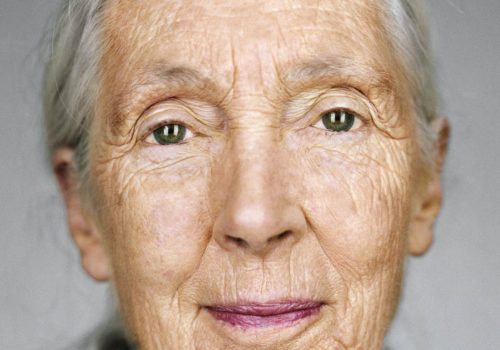 It´s fashion week in Berlin and the museum The Kennedys is lending its walls to Martin Schoeller’s famous close-ups of celebrities like Angelina Jolie, Paris Hilton, George Clooney and Barack Obama. La Lettre’s art director talked to the photographer before the opening on July 6.

Good morning Martin, where are you?
I´m in South Carolina, on an advertising job.

Do you travel a lot?
On and off. Of course I go to LA and Miami – I travel a lot in the States. And I was in Africa for one month for National Geographic.

You´re German but you live in New York. When did you move there?
I moved to New York in 1992. I worked with a good photographer in Hamburg but I wanted to do better. Paris felt hard and scary – to much fashion. I wanted to work for Annie Leibovitz or Irving Penn. And Annie Leibovitz hired me in 1993.

Tell me a bit about your background. How did you get into photography? Where you always interested in taking pictures?
I grew up in Frankfurt. Until I was 19 I had no idea what I wanted to do. I did some social work. It was a friend who applied to a photo school and convinced me to apply too. They took me, but my friend didn´t get in.

Are you still friends?
Yes, we are. He´s a really good camera man.

You left Annie Leibovitz in 1996, how was the first years working for your self?
I worked for Annie between 1993 and 1996. It was really scary but exciting to be on my own. I was seeing magazines trying to get assignments. My first job was to shoot some preachers in NYC for Time Out. Then they commissioned me to shoot Vanessa Redgrave. I did some close ups on her face with a little smile – the image turned out really great.

In 1999 you got a contract with The New Yorker, a magazine that Nicholson Baker mentioned, in Port magazine, as ”one of the three great contributions United States has made to the world” ( Some Like it Hot and the iPhone are the other two!). How did that happen?
Well, I shot the legendary skateboarder Tony Hawk for them. He´s jumping off the kitchen table on his skateboard… They liked it and gave me another two or three portraits and I delivered. Then they offered me a contract, and I still work for them.

Which other magazines do you work for?
Rolling Stone, GQ, Entertainment Weekly, National Geographic, Vanity Fair and sometimes Vogue.

You manage to get major celebrities to do the silliest things with their honour and pride intact. Do you enjoy the challenge?
Yes, I enjoy the challenge, but I´m also bored with all these images where people trying to look hot and sexy.
It´s hard work though. 90% of the time you´re only in contact with the publicist – I never tell them what I want to do. People are so afraid and image conscious. Most times I try to convince the person when they already are on set.

Your photography is also shown in exhibitions, museums and art galleries. Do you make a difference between art photography and working for a magazine.
Yes, I only exhibit the ”close-ups”.

You´re probably best known for your ”close-ups”. It seems to be an endless, ongoing project. How did you got started?
I´m not afraid of people and I have always been drawn to close up portraits. Actually I applied to photography school with a close-up portrait of an old man. Then when I worked for Annie I had to do all these lighting tests and then I shot close-ups.

How do you work on this project today? Do you always shoot a close-up in the back of other shoots?
I always shoot them on assignments. Many magazines likes the close-ups and commission me for them. But no matter what they say, in the end they want something else.

Next week you´re showing at The Kennedys in Berlin. What can we expect to see there?
As I said, I only exhibit ”close-ups”

The exhibition is running during Berlin Fashion Week. Are you interested in fashion and fashion photography?
No, not really. In the beginning yes, but then only for the girls. I hate shopping. I have 30 black t-shirts, 2 pair of jeans…

Finally, what are you working on now?
There is always shows… Then I´m working on a project on tribes but nothing planned for it yet.

Sounds great. Thanks Martin, and good luck with the shooting today.
Thanks.

Martin Schoeller was born in Germany in 1968. He studied photography at Lette Verein in Berlin and moved to New York in 1992. He worked as an assistant for Annie Leibovitz from 1993 to 1996. Today Schoeller is one of the best-known portrait photographers of the younger generation. He works for magazines like Rolling Stone, GQ, Esquire and Vogue and he´s a staff photographer for The New Yorker since 1999. In 2005 teNeues published the book Close Up: Portraits 1998-2005 and in 2008 Pond Press published Female Bodybuilders.

Magnus Naddermier is the art director of La Lettre de la Photographie. He has the pleasure to publish some of Schoeller’s images from time to time.