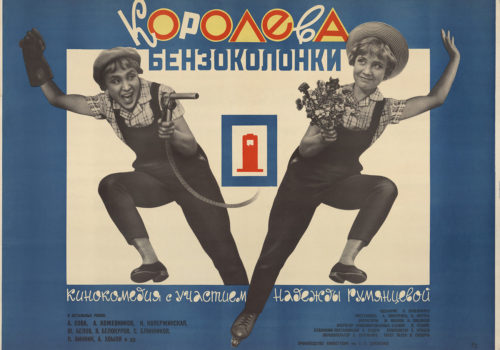 The exhibition showcases more than 100 original posters for famous Soviet films including ‘The Girls’, ‘Beware of the Car’, ‘Office Romance’, ‘The Irony of Fate, or Enjoy Your Bath!’, ‘Love and Pigeons’, ‘Mimino’, ‘Station for Two’, ‘Assa’, and other cult movies.

The 1920s were the heyday of Soviet avant-garde cinema. It was then that Sergei Eisenstein created his innovative films ‘Strike’ (1924), ‘Battleship Potemkin’ (1925) and ‘October’ (1927), which revolutionised not only Soviet, but also world cinema. Posters congenial to the film ‘Battleship Potemkin’ were designed by the acclaimed Alexander Rodchenko, who also worked on posters and fonts for Dziga Vertov’s legendary film magazine ‘Kino-Pravda’ (1922—1924). Rodchenko went on to create posters for ‘Cinema Eye’ (1925) by Dziga Vertov, who received the Silver Medal at the World Exhibit in Paris. From the 1920s onwards the best artists of their day worked on film posters for Soviet movies. Posters from the era of Soviet modernism are quite well studied and often appear at Russian and international exhibitions, but Soviet film posters of the post-war period receive much less attention.

The Khrushchev thaw gave a new impetus to the development of Soviet cinema. Consequently the years from the late 50s to late 80s produced films that today make up the golden fund of Soviet cinema. The times were changing, and likewise the style of that period changed, the style of cinema and, of course, the style of film posters, reflecting and expressing the visual atmosphere of successive eras.

In the Soviet Union cinema became the most popular of the arts. It was seminal in forming the ethical and aesthetic sensibilities of millions of people. In the pre-Internet era the film poster played a huge role in the popularisation of films. Artists who worked on movie posters had to create a vivid and powerful metaphor that would capture the potential audience, express the story of the film in a concentrated way, and also match the visual aesthetics of the film.

In 1945 the central publishing house of the Soviet Union for the production of film advertising, Reklamfilm, was organised by order of the Committee on Cinematography, uniting the best artists of that time for the mass production of film posters. Today few people remember their names. Yet Boris Zelensky, for example, created more than seven hundred film posters during his creative career. In 1948 he was awarded the main prize of the International Film Poster Exhibition in Vienna. At the exhibition he is represented by posters for the films ‘Volga-Volga’ and ‘Hamlet’. The director of the film ‘Hamlet’, released in 1964, was the brilliant Georgi Kozintsev, the music for the film was written by Dmitri Shostakovich and the main role is played by the great Innokenti Smoktunovsky. This remarkable film nominated for the Golden Lion and awarded a BAFTA for Best Film is forgotten today. It is definitely worth watching again. Over the years many excellent directors have created Hamlets, but Kozintsev’s film is a masterpiece. The history of the Soviet film poster helps us remember the history of Soviet cinema.

Mikhail Kheifits began his artistic work in 1948 at Reklamfilm. He designed more than 200 film advertisements, placards and information posters, becoming a member of the creative association Agitplakat. In 1976 he was awarded a Bronze Medal at the International Poster Competition in Bologna. Kheifits not only produced film posters but also wrote many articles about the art of the poster, and in particular the film poster. The exhibition at MAMM presents his posters for such legendary films as ‘Carnival Night’, ‘Striped Trip’, ‘Operation Y and Shurik’s Other Adventures’.

Leonid Bogdanov was a leading artist in the film advertising industry of the 1980s whose works were included three times in ‘The World’s Best Posters’ exhibitions under the auspices of UNESCO. At the MAMM exhibition you can see his posters for the cult films ‘Aybolit-66’, ‘To Kill a Dragon’ and ‘Kin-dza-dza!’

The MAMM exhibition is a fascinating study of the history of the poster and also the history of the country, for art exists and develops in the context of a specific historical period. Some of the film posters featured at the exhibition were created on the basis of photography and mark important pages in development of the photomontage genre in the USSR.

In September 2020 MAMM received a generous gift from the City of Moscow — a new storage facility in Yurovo with an area of 2.5 thousand square metres that will allow us to reach a new level in developing the museum collection, which includes more than 170 thousand storage units. If until that time our precious collection was huddled in three hundred metres on Ostozhenka and partially distributed in rental spaces lacking museum storage conditions, now we can both accept as gifts and purchase works of art related to other media, not just photography or video, which corresponds to the logic of our exhibition projects.

The exhibition ‘Soviet Film Posters. 1950s—1980s. A gift from the Karisalov family to the Multimedia Art Museum, Moscow’ heralds a whole series of projects set to display works donated to our museum.

A GIFT FROM THE KARISALOV FAMILY TO THE MULTIMEDIA ART MUSEUM, MOSCOW