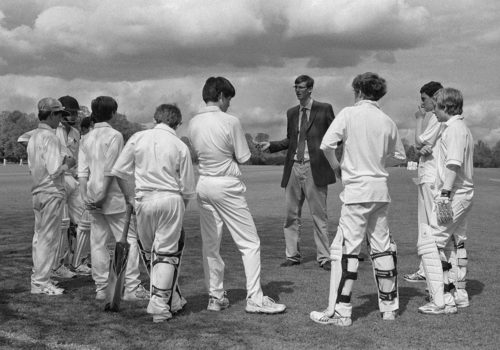 As part of the XII Moscow International Biennale ‘Fashion and Style in Photography 2021’ the Multimedia Art Museum, Moscow presents the exhibition ‘Eton. The School for Gentlemen’. On display are photographs by the Eton alumni Serge Mosesov and Anatole Sloan, with additional newsreels about Eton College from the 1920s to 1960s. The exhibition reveals life in one of the UK’s oldest and most prestigious educational institutions, founded by King Henry VI in 1440.

This exhibition at MAMM is particularly interesting because it shows Eton from the inside, through the eyes of students. Serge Mosesov and Anatole Sloan created the project during their final year of study. Outsiders, especially photographers and journalists, are not usually allowed inside Eton. The school remains closed to the general public and communication with the press is strictly regulated. However, the school management approved of Serge Mosesov and Anatole Sloan’s photographs, and their book ‘The Boys’ Side’ was published on this basis.

Eton College is located just a few steps from the royal castle at Windsor, the summer residence of the monarchs. Heirs to the throne were traditionally educated at Eton, and for them alone the school made an exception — they were exempt from the entrance exams. The future British monarch Prince William and his younger brother Prince Harry are also graduates of Eton. Among the pupils of the school are 20 British prime ministers (including the current Prime Minister Boris Johnson), more than 30 field marshals and admirals of the fleet, outstanding writers (George Orwell, Aldous Huxley, Percy Bysshe Shelley, Ian Fleming), scientists (John Maynard Keynes, Robert Boyle), musicians, actors and explorers.

Initially the school was charged with preparing 70 boys for entrance to Cambridge University at the expense of the Crown. Nowadays the school has 1290 pupils, but there are still 70 royal scholarships offering free tuition and full board in compliance with the decree of Henry VI.

In recent decades Eton has become increasingly open and international. After passing the difficult entrance exams, applicants, including foreign students, can become fully-fledged pupils at a school that has been cultivating talent for the past 600 years — the future business, political and artistic elite of Great Britain, and now the whole world.

The MAMM exhibition is a unique opportunity to learn about the traditions and way of life at the school, which has its own style of clothing, language, codes of behaviour and sports games, for example the Eton Wall or Eton Fives. ‘Old Etonians’ can easily recognise each other after a few words have been exchanged, through signs imperceptible to others.

Eton not only teaches students academic disciplines, it forms individuals who have an independent way of thinking, who are ready for the challenges of the future. Thanks to the pictures of Serge Mosesov and Anatole Sloan we can ‘visit’ the school’s theatre, where students perform Shakespeare’s plays, or ‘attend’ rugby competitions at which a rite of initiation transforms young men into fighters.

In the words of the photographers, ‘We remember these moments with heartfelt tenderness and feel the strength of our connection with each other. They shaped us as we are now, and taught us to value hard work and responsibility to society.’ Rudyard Kipling might well have had the Etonians in mind when he wrote his poem ‘If—’:

‘If you can talk with crowds and keep your virtue,

Or walk with Kings — nor lose the common touch,

If neither foes nor loving friends can hurt you,

If all men count with you, but none too much:

If you can fill the unforgiving minute

With sixty seconds’ worth of distance run,

Yours is the Earth and everything that’s in it,

Serge Mosesov and Anatole Sloan : Eton. The School for Gentlemen