MAMM : Natalia Bogdanovich and Sergei Pushkin : Cats in the City of Grodno 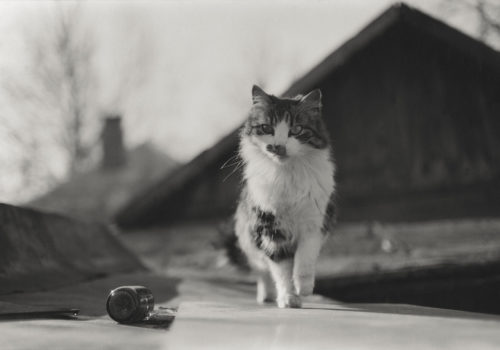 As part of the XII Moscow International Biennale of Fashion and Style in Photography 2021 the Multimedia Art Museum, Moscow presents ‘Cats in the City of Grodno’, an exhibition by Natalia Bogdanovich and Sergei Pushkin.

Grodno is a delightful old city, a city of romantics and cats. With their independence and bewitching gentleness, cats have forever won the hearts of Grodno residents and imperceptibly ‘seized power’ in the city. Sergei Pushkin visited from Moscow in 2004 for the opening of his solo exhibition. It was in Grodno that he met Natalia Bogdanovich. When they decided on a joint project the Grodno city cats constantly caught their eye and delicately conveyed to the authors who was in charge of the city, and who should take the leading role.

Work on the series ‘Cats in the City of Grodno’ took two years. During this time Natalia Bogdanovich and Sergei Pushkin pursued their ‘photo hunt’ irrespective of the time of year or inclement weather. Having chosen a small-format, fine-grain film with low sensitivity (only 25 mm) for the shoot, they nearly always used a tripod. Usually a small-format film produces a large grain, but Bogdanovich and Pushkin opted for the experimental German film Gigabitfilm, which gave a smooth texture and enabled the lens to catch the slightest nuances.

The photographers wandered around the city, intuitively looking for places where a striking ‘photographic’ event might occur. They positioned the camera and waited. Having ascertained that the strange people with the tripod were unwilling to back down and determined to complete the project, the cats began helping in the selection of locations, although condescendingly, as cats are wont to do. As a result the photographers captured in their lens the veritable masterpieces of wooden architecture that are inexorably vanishing into the past under the onslaught of modern urban planning. Bogdanovich and Pushkin chose the angle and determined the composition of the frame together, taking turns at the viewfinder and discussing which option was best. The cats would patiently pose or suddenly throw a somersault, checking the photographers’ speed of reaction. There are almost no people in the pictures – nothing superfluous, just the city and the cats.

The series ‘Cats in the City of Grodno’ is included in the collection of the Multimedia Art Museum, Moscow. Natalia Bogdanovich and Sergei Pushkin are especially grateful to Tatiana Isaeva, the wonderful printmaker at MAMM, ‘whose skill, restraint and perseverance of character when discussing the wishes of the authors contributed to a more complete expression of their creative idea.’

Natalia Bogdanovich is an artist and teacher of drawing, painting, composition and Chinese Guohua painting. In 1989 she graduated from the Art and Graphics Department of the Masherov Vitebsk State University. Since 1997 she has been a member of the People’s Photo Club in Grodno. Prizewinner at the international exhibition ‘The World Through Women’s Eyes’ (Haifa, Israel, 2014).

Sergei Pushkin has been working as s photographer since 1997. He is a participant in the creative association Studio-110. Pushkin’s images have been exhibited at museums and galleries in Moscow, Berlin, Feodosia and Grodno. Winner of the Silver Camera award for the best photo reportage about Moscow in the Architecture category (2000).

Natalia Bogdanovich and Sergei Pushkin : Cats in the City of Grodno