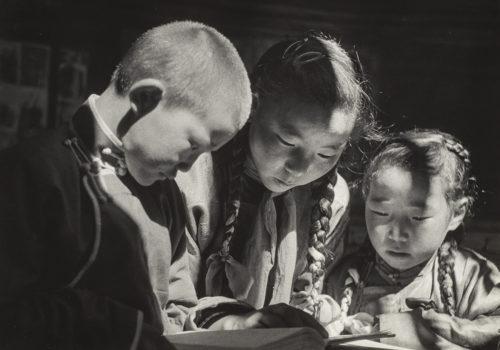 Until February 26th, 2023, the Maison de la Photographie Robert Doisneau presents an exhibition which retraces, through a hundred prints and personal archives, the career of Ergy Landau, a photographer of Hungarian origin who settled in Paris in the early 1920s and a prominent figure in the history of photography, from the 1930s to the 1950s.

The book Ergy Landau, a photographer’s life, 1896-1967, published by Bec en l’air, accompanies this retrospective with a rich and informative text by the curators of the exhibition, Laurence Le Guen and David Martens.

As a reminder, Ergy Landau was born in Budapest in 1896. At a very young age she trained in photography, with the great German and Austrian masters in particular, opened a first studio in Hungary and then emigrated to Paris. She joined the Rapho photo agency when it was created in 1933. Jack of all trades, she worked for the press, participated, with her nudes or her portraits, to the greatest French and international exhibitions and published books for children or pedagogy up to her accident in 1964. After her death in 1967, her photos gradually fell into oblivion, the 60s and 70s were not conducive to nostalgia. It was not until the end of the 1980s that we rediscovered her work on the occasion of one of the three exhibitions organized, at the instigation of Raymond Grosset, by Paul Jay, then director of the Niepce Museum in Chalon sur Saône, and devoted to the work of 3 female photographers: Ergy Landau, Ylla and Nora Dumas, who were her assistants.

Here is the text written by Raymond Grosset on this occasion:

The young teenager that I was that rainy summer of 1928 spent in a small mountain hotel, gazed with surprise at a woman bent over her camera of an unknown shape, a Rolleiflex 4×4 cm. Ergy Landau had just purchased the first Rolleiflex sold in France, the 6×6 version of which soon transformed the photographic vision.

Everything has been said and slandered about the Rolleiflex: the vision of the world through the navel, a dry image, the square shape of which requires cropping at enlargement, a lens that is too short for portraits.

The camera was, however, revolutionary for its time and was immediately adopted by all young photographers wishing to fight against the rigidity of photography taken with large format cameras.

Like most professionals of the time, Ergy Landau made a living from her activities as a portrait photographer.

Highly introduced in artistic and literary circles, her clientele in 1930 was mainly composed of writers and artists: Bourdelle, Paul Valéry to name only the best known, then Claude Aveline, Brice Parain, etc.

Her Saturday teas, served in her studio on the rue Lauriston, were quite representative of the milieu in which young photography was appreciated: Photographers and writers rubbed shoulders with artists from the Hungarian colony and visiting foreign photographers.

It was around 1932 that Ergy Landau began to use a Rolleiflex for her portraits of children: she obtained lively expressions that made the frozen portrait perpetuated by classic studios anachronistic.

It is hard to imagine the technical difficulties of the time, the slowness of the films, the poverty of the lighting which made photography to 1/50th of a second in the studio, a perilous exercise! Picture quality often had to be sacrificed to achieve a lively expression taken out of the blue by distracting the child’s attention with toys. Ergy Landau’s professional, let’s say “food” work is however not comparable to her research, carried out during her leisure time and for her personal pleasure.

These photos, known to the limited public of the rare photographic exhibitions of the time, were gradually published in art magazines often published by medical laboratories and then saw the beginnings of use in the press and advertising.

1939 consecrated the success in the press of modern photography which, after the war, experienced the explosion that we know.

Jewish, Ergy Landau nevertheless remained in Paris during the occupation and, it was a miracle, she was never bothered or denounced, despite her refusal to wear the yellow star.

In 1953, thanks to the help of Yves Farge, she went to China to accompany the first French group authorized to visit communist China.

A book produced with Pierre Gascar « Aujourd’hui la Chine » was to summarize this trip.

Ergy Landau died in 1967, hemiplegic and bedridden, after three years of attentive care.

Treated at home, she ignored until the end the discreet help of her many friends who wanted to return the warmth and generosity she showed them all her life.