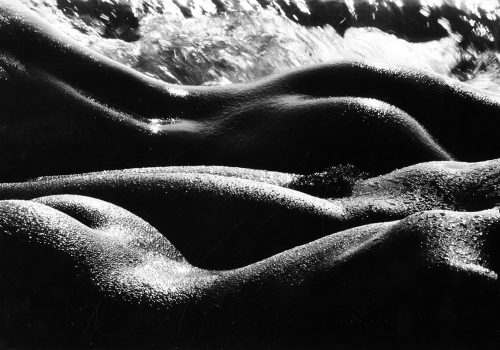 Pablo Picasso once said : “Clergue’s photographs are from God’s own sketchbooks”

Throckmorton Fine Art presents an exhibition of female nudes and iconic photographic images spanning the fifty year career of one of France’s greatest photographers, Lucien Clergue.  On the 50th anniversary of the launch of the Rencontres de la Photographie d’Arles photography festival, which Clergue co-founded with Michel Tournier, Throckmorton Fine Art gallery will feature more than forty black and white and color images, including some of Clergue’s most acclaimed images.

Spencer Throckmorton says, “Clergue was a master of sensual photography, brilliantly capturing the play of light and shadow, as well as they of the human form.  His photography is classic, never forced or manipulated.”

While Clergue photographed many subjects, among them portraits of fellow artists (including his dear friend Pablo Picasso) Clergue is most renowned for his female nudes.  The Throckmorton exhibit offers an opportunity to see grouped together many of his outstanding photographs from three decades of his long and productive career.

Clergue was born in 1934 in Arles, France and died in 2014 in Nimes.  Though he was obsessed with learning to play the violin, Clergue took up photography, studying it with utmost discipline and seriousness. Lucien Clergue had already discovered the power of the camera in his difficult adolescence after witnessing the destruction of his family’s house by WWII bombs and the prolonged illness and death of his mother.  His later work turned to organic abstractions of sand and lace and was influenced by mythology, adventure and what he called, ‘the mentality of the Mediterranean man.”

At the age of nineteen, he managed to meet Pablo Picasso and show his work. Leaving the Arles bullfighting arena, Lucien Clergue summoned his courage and approached the then 62 year old Pablo Picasso to show him his photographs.  Clergue worked for the next two years to prepare a portfolio to impress the master. His photos of Provence and postwar ruins led to a five hour conversation with Picasso in Cannes in 1955 when Picasso promised to design a cover for Clergue’s first book as well as a poster for his first exhibition.  While the poster was too provocative for the organizers to use, this meeting resulted in a lifelong friendship until Picasso’s death.

Clergue established himself as one of his generation’s most admired photographers, joining the ranks of another friend, Henri Cartier-Bresson. Clergue was well liked by his peers; he cared about art and worked tirelessly to promote the arts in France, especially fine photography.  In 1968 Clergue, working with Michel Tournier, founded the Rencontres d’Arles photography festival, which is held annually in July in Arles. This year’s festival, from July 1 to September 22, will feature 50 exhibitors  and attract a worldwide audience of photography professionals, academics and connoisseurs of fine art photography.

There have been over 100 solo exhibits worldwide of Clergue’s photography. Clergue’s work was notably included in the last exhibit at the Museum of Modern Art in New York curated by Edward Steichen (also included in the exhibit was work by Bill Brandt and Yasuhiro Ishimoto).  Museums with large collections of his work include the Fogg Museum at Harvard University and the Museum of Fine Arts in Boston.  His work has been widely published, too. He was the first photographer to be elected to the Académie des Beaux-Arts de France and was honored with both the Order of Merit in 1980, and the Order of the Legion of Honor, in 2003. In 2013 he chaired the Academy of Fine Arts of the Institute of France.  He is also a member of the Arles Academy of Arts, held a Ph.D., and was the author of 75 books. Lucien Clergue was the first photographer to present a thesis with photographs only, no hand writing, —-writing with light only.

Throckmorton New York was the New York representative of Clergue from 2009 until his death. Clergue is remembered with fondness by everyone at the gallery.  He had an acute memory, was a great storyteller, and unfailingly in good humor. He was decidedly —-  and proudly —- French, but he loved America, and did great work here. Spencer Throckmorton says, “Clergue’s photographs are timeless; the show is not to be missed.”

Lucien Clergue was married to the art curator Yolande Clergue, founder of The Fondation Vincent van Gogh Arles. This month she asked, “How did this vulnerable young man, the one I married, succeed in photography, creating iconic images and promoting photography throughout the world?  I believe it was Lucien’s love of poetry, film, painting and music which opened his eyes and which introduced him to an aspiring social network of the leading figures of the French art world.

“Lucien was an artist who was intrigued by light, drawn to see light out of his native Mediterranean setting.  Lucien came to America with a strong sense of curiosity.  He was captivated by New York, and he scrutinized every street.  He visited museums and galleries exhibiting the work of prominent contemporary photographers.

“Lucien would also come to be a frequent visitor to the immense deserts of America, being drawn to the openness and brilliant light. He continued his study of the nude, an enduring subject of art that dates back to ancient times.”

The Clergues met Spencer Throckmorton in Arles.  Yolande Clergue says “Spencer said the light in Arles was similar to the light in New York. Lucien knew of Spencer, of his gallery and of his being an astute connoisseur of photography. Spencer knew what he wanted when he offered to exhibit Lucien’s work in his New York gallery.  I am pleased that Spencer continues to show the work of Lucien Clergue in New York.”