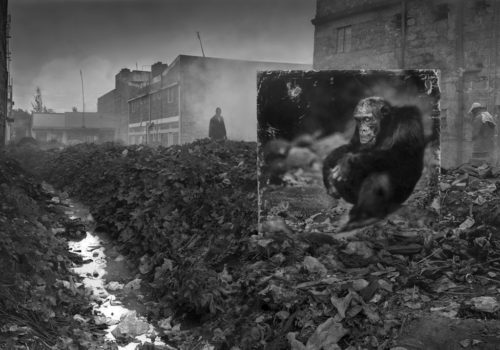 Since 2001, fine art photographer Nick Brandt has been documenting the vanishing natural world and animals of East Africa through his haunting, majestic portraits of elephants, giraffes, lions, gorillas, rhinos, and other large mammals.

Three years after the somber conclusion of his African trilogy, On This Earth (2005), A Shadow Falls (2009), Across the Ravaged Land (2013), Brandt returned to East Africa to photograph the escalating devastation to the continent’s natural world. In a series of epic panoramas, he records the impact of man in places where animals used to roam, but no longer do. In each location, Brandt erects a life size panel of one of his animal portrait photographs, setting the panels within a world of explosive urban development and toxic wasteland.

Inherit The Dust includes two essays by Brandt. The first relates to the urgent crisis facing the conservation of the natural world in East Africa. The second is a fascinating behind-the-scenes account of the arduous months of production to create each work.

Nick Brandt has photographed exclusively in Africa since 2001. Brandt’s work has been widely exhibited at major museums and galleries in the United States and internationally. Born and raised in England, he lives in the mountains of Southern California.

In 2010, Brandt co-founded Big Life Foundation, a non-profit organization protecting 2 million acres of ecosystem in East Africa. With nearly 300 rangers, poaching has been dramatically reduced in the region, and is one of the few conservation success stories currently in East Africa.

Barbara Griffin: Your images clearly do much more than just capture the likeness of the animals being photographed. What is your process for creating these portraits that give us a real sense of the animal’s spirit – its nature and relationship to other animals and to the environment?

Nick Brandt: There wasn’t any real process (I say ‘was’ as I don’t photograph those animal portraits any longer.) I simply photograph the animals as I would human beings, regarding them as sentient creatures not so different from us, and certainly not inferior. And that informs the way that I take their photos. The difference is, of course, that I can’t direct them, so I have to wait for them to present themselves for their portrait.

BG: How have the challenges inherent in photographing animals in the wild changed, especially as man encroaches further into their natural habitats? Are they increasingly difficult to find?

NB: We have to back four years to when I last photographed animals in the wild, but back then, yes absolutely, it was getting harder, with an ever-diminishing number of places left for them to exist.

BG: We’ve read about the positive impact of wolves re-introduced to the Yellowstone ecosystem, despite protests from commercial interests surrounding the park. How would the loss of lions, elephants, eland, cheetahs, giraffe and other great animals affect Africa’s ecology and economy?

NB: In most of the parts of East Africa where the animals do still remain, the land is semi-arid. Take away the animals, and there’s almost nothing left of economic value. The land can only support so much herding or farming.

So ecotourism is the only truly significant source of long-term economic benefit. The economic value of these animals is astonishing. To give you an example, when an elephant is killed by poachers, the average sum earned by poachers and traders will be around $20,000, with obviously none of it seen by the community. But it has been calculated that over the course of its lifetime, a single elephant will contribute more than $1.6 million to the country’s tourism economy.

So Africa is sitting on a veritable gold (elephant) mine. And as the continent-wide destruction continues, those ecosystems that do remain will become even more precious and highly valued.

BG: In 2014, you conceived the idea of mounting life size photographs in real locations. The project symbolically placed now-absent animals back into land they once roamed, highlighting the environmental destruction and often toxic urban wastelands that have replaced natural habitats. Nowhere in your work is this approach more evident than in UNDERPASS WITH ELEPHANTS (Lean Back, Your Life is On Track (, 2015. Can you talk about interactions people are having as they encounter the artwork in situ?

NB: Nothing can beat shooting everything in situ. In other words, Photoshop can’t beat that. I actually wanted the people to be oblivious to the presence of the panels in all but the final shot, this one.

I wanted just one person, a child, to see the animals in the panel. For me, I believe we are born with a natural connection to nature, but as we grow up due to a myriad reasons, many of us lose that connection. So I always planned for the little boy on the left. But I never imagined that this tiny boy on the right, a child of one of the many homeless people sleeping out on the land beneath this underpass, would wander into frame, fascinated by these giant elephants, and touch them with what appears to be a stick in his hand.

BG: To me, your photographs are a tribute to the majesty and uniqueness of these great African animals. It’s hard to understand how anyone can look at your images and possibly feel justified in exploiting them or taking them for granted. How does this work not break your heart?

NB: It does break my heart, but it’s made less painful because I am doing something about it through my Foundation, Big Life. Instead of being angry and passive, I am being angry and active, which is a much better place to be psychologically.

If I chose to photograph factory farmed animals, who live lives of torment, torture and misery to make meat a bit cheaper, I would want to save all of them, and of course not be able to, and then, I think, become quite homicidal.

BG: At what point did photographing the animals shift from preserving the memory of them in their rapidly diminishing environments to protecting them through Big Life Foundation?

NB: In the summer of 2010, I returned to Amboseli for the first time in a year and a half. This was when I learned that in the time that I had been away, the poaching had spun out of control. Some of the last few dozen mature breeding bulls in the ecosystem were getting killed almost every week.

At first I thought the poachers would just target the elephants with big tusks. But even elephants with tusks barely more than broken stumps were being killed. No elephant was safe any more.

The protected park area is tiny, and the animals spend large amounts of time on community land where they are instantly vulnerable to being killed. But there were almost no NGO’s so outside the small park, no one was there to stop the poachers.

Also, with Amboseli’s ecosystem straddling the Kenya / Tanzania border, most of the poachers were coming over the border from Tanzania, making their kills, and then escaping back with no-one to grab them on the other side.

Animals pay no attention to borders. And nor do poachers. So neither can we.

Fortunately, I got in contact with Richard Bonham, one of the most highly regarded conservationists in East Africa, who has lived on the edge of the ecosystem, but for many years had struggled with very little funding. Together, we founded Big Life Foundation in September 2010.

Now 5 years later, Big Life has 41 outposts and mobile units across the two countries, 300+ rangers, all locally employed. We are now the biggest employer in the area, and with all that, poaching of all animals in the area has been massively reduced.

BG: What do you hope that people will take away from experiencing this work? How can we help?

NB: The photos appear to offer little hope. They seem to be dystopian visions showing the end of nature. But the point is that these animals DO still remain in parts of Africa, albeit fewer parts by the day. And so we still have a chance to protect and preserve the places and those animals where they still live. If we can, corny though it sounds, then the animals, the local communities, us, the planet – we all win.

So we have to put pressure on governments and industrialists to understand the long term economic gain of environmental protection. It’s not very poetic – we should just want to save these places for their intrinsic beauty – but in this day and age, we have to be pragmatic. And then the other thing is to donate to organizations that are making a difference on the ground, like Big Life! So please go to biglife.org and donate!

Barbara Griffin is Board President for Atlanta Celebrates Photography (ACP), a non-profit arts organization dedicated to the cultivation of the photographic arts and the enrichment of the Atlanta art community. ACP aims to make Atlanta a leading center for the world’s fastest growing art form, producing the largest annual community-oriented photo festival in the United States.

Formerly senior vice president of Image Management for Turner Broadcasting System, Inc., Barbara was responsible for all photography created for Turner’s entertainment, animation and news networks.  Additionally, she oversaw the Turner Photo Library, a collection of more than eight million images representing the visual history of the company.

A frequent lecturer on professional photography, she currently serves on the Advisory Council of re:imagineATL, is on the TEDXAtlanta steering committee, a member of the High Museum’s Friends of Photography group, the International Center of Photography and the Academy of Motion Picture Arts & Sciences.