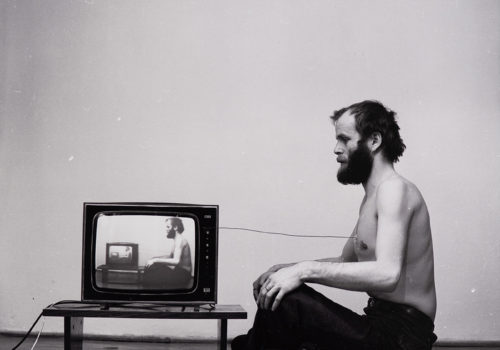 The Polish Art Center celebrates the avant-garde collection of curator and art critic Urszula Czartoryska. Twenty years of acquisitions that navigate between new techniques of image manipulation and humanist grandeur.

From 1977, this figure of Polish photography, curator and critic in magazines dedicated to the medium had the opportunity to create a department dedicated to photography in this museum in Łódź. Little by little, over the years, she has managed to build an astonishing collection, made by her singular gaze and strongly forged by what touched her in the different dimensions of the image.

What the curators Marta Szymańska and Maria Franecka, as well as the museum team, are trying to do is to restore the spirit of this great assembly of photographic works by choosing 150 of them and forming a route able to bear witness to its importance.

Thus, they decided to first focus on the avant-garde gaze of Urszula Czartoryska who very early understood the mutation of the image and its extensions in manipulative works.

Whether these artists are from Eastern Europe, in particular from Poland, or from other corners of the world, they all have this resemblance of having thought of using the photographic image as a medium for an art expression where the play on what is shown, distorted or hidden impacts the viewer. This is the case of the nested images in a puzzle game by Janusz Bakowski in the early 1980s or the strobe effect on the naked body of a young woman by Waclaw Novak in 1966.

The museum’s curator had a knack for spotting what the art market would declare thirty years later as a new essential style, that of conceptual and experimental photography, to which artists today refer a lot. She had this incredible attention to a form of creation that was not yet valued as it can be today.

The other aspect that surprises the visitor and makes Urszula Czartoryska an inspired person in these choices of acquiring works is the large part of the collection dedicated to what could be integrated into the humanist current. There is a very beautiful photograph of the daughter of Polish pianist Arthur Rubinstein, originally from this city, who has the same name as her father and whose first name is Eva. There are two very strong images of Julia Pirotte, a Polish exile in Marseille during the Second World War who knew how to capture all the complexity of a world swinging between the best and the worst, still resonating deeply today. There are these children’s games photographed by Bodgan Dziworski which makes all the poetry and joy of these suspended moments. As exhibition curator Marta Szymańska explains, there is a form of “Tenderness” in the collection produced by Urszula Czartoryska and it certainly emanates from most of the photographs exhibited here.