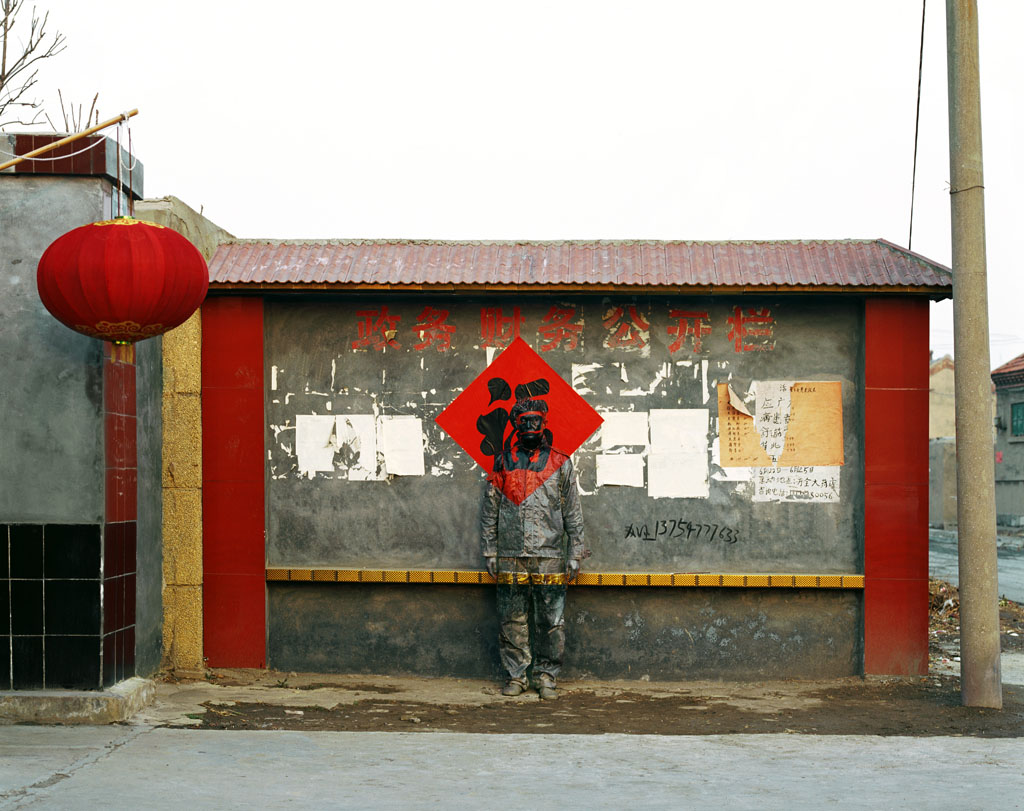 Liu Bolin’s ability to make himself invisible is, paradox aside, the most remarkable aspect of the Moscow photo biennial. Although a few exhibitions have yet to open, his exhibition at the Ekaterina Cultural Foundation is so far the year’s most interesting. The Chinese artist’s large-format photographs occupy three vast rooms. The first room plunges the viewer into China in the 2000s. In every photo, one can barely make out a man standing against a wall or other object. His body is meticulously painted in order to perfectly imitate whatever he stands in front of. At first it seems to be a political statement: the person appears swallowed up, digested, absorbed and erased by the background, which varies from the Chinese Communist Party flag, a factory wall and political slogans to an unsmiling police officer, who covers the model’s eyes with his hands. The meaning of each photographs comes exclusively from its background. The sole exception is the police officer, who interacts with the foreground, i.e., the standing man. The police officer is completely dehumanized, becoming inert matter. We see a man engulfed by an environment, his identity negated. He cannot merely be a part of the environment: he must become one with it, annihilating himself in the process. Liu Bolin seems to be telling us that he’s trapped in a civilization ruled by fundamentally anti-humanist ideals. But several things call this tragic interpretation of Liu Bolin’s work into question. After all, the model stands straight up with his eyes closed, always alone. Is it a means of escaping the dominant ideology through camouflage? Bolin explains that a large part of his work consists in examining the ever-changing dialectic between the individual and society.”There’s always a place for liberty,” he says. “When I worked in Europe,” Bolin explains, “I realized that I was above all Chinese, then an artist, and finally a tiny individual.” He melds into the European backgrounds of the Scala in Milan, and into a supermarket shelf of perfectly arranged products. In Moscow, the artist decided to pose in the Multimedia Art Museum, standing before a background of Russian newspapers that he selected. As a swarm of assistants and artists worked hastily to prepare the shot, someone remarked that it must be nice to only be the model. Liu retorted that being an artist today no longer means working with materials, but with a concept. Emmanuel G Through May 13 at the Fondation Ekaterina as part of the Photobiennial 2012 Kuznetsky most st. 21/5, Moscow, Russia, 107996 Téléphone 8 4956215522