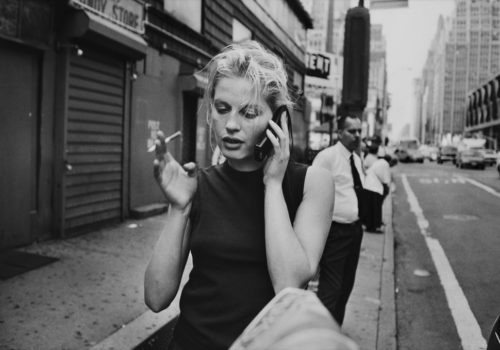 Today, anyone who deals with “street photography” sees a broad spectrum of social, humanist, political or documentary motivations and views, which have only one thing in common:  the street . The origin of ‘street photography’ can therefore be assumed to originate from the Parisian studies Paris pittoresque and Le vieux Paris by Eugène Adget, which emerged towards the beginning of the last century. Eugène Adget documented the streets of his hometown Paris with a large 18×24 plate camera around 1900. The most important development, however, for ‘street photography’ was the invention of the compact Rolleiflex camera, developed around 1927 as a prototype of a small and fast hand camera.

Street Photography started to peak in the early 1950’s, when photographers such as Robert Frank or Henri Cartier-Bresson started to stroll the streets with a lightweight Leica in their hands and began to intellectually and artistically express themselves. With these two giants of street photography one can already detect the various methods of approach and intention. Whilst Cartier-Bresson mostly took the quirky moment as the focus for his photography, Robert Frank selected the street as a reflection on the political and social situation of an entire nation. In his book The Americans Robert Frank travelled throughout the United States of America in 1955/6 and created a portrait of a nation in change that is unrivalled, even today. His photographs described the mood of a country by showing moments on the street, characterized by the lively, sad, mystical, focused or absurd moments, when a shadow on the street falls; or a flag, hanging between two windows ‘cuts’ off the heads of those looking out of the windows. With these photographs the beholder senses the subtext of the moment that elevates a photograph to a work of art and turns a picture into something iconic.

Garry Winogrand, born and raised in the Bronx, belongs to the generation of photographers who would, with a passionate devotion and a high aesthetic and artistic approach, develop the genre “street photography”, even before the medium photography began to be considered art. Today the pioneers of the late 1950’s and 60’s are considered heroes, seemingly almost untouched in their artistic achievements: Lee Friedlander, Diane Arbus, Joel Meyerowitz, Tod Papageorge, William Klein, William Eggleston, Tony Ray-Jones, Bruce Davidson, Elliott Erwitt or Stephen Shore.

With the help of the photographs of Garry Winogard and his photographer friend Joel Meyerowitz, with whom he roamed on an almost  daily basis, the streets of New York between the years of 1962 to 1966 for motives and moments, one can miraculously decipher what is considered to be the essence of “street photography”. More important than the photographic view that unites the perception of a situation in itself, is the inner attitude of the beholder to observe, and the social competence of the photographer towards the man across .

Exactly within that dialogue, between the photographer and the rest of the world, the secret of street photography spans like a theatre stage in  front of the photographic eye, there lies the secret of street photography. In an experience that is almost physical, the energy that unloads between the protagonist and the photographer, gives the quality of the shot. This manifestation of the ephemeral, coupled with the autonomy of the individual as a part of an overall composition, elevates a photograph into a work of art, whether in color, or black and white. The photographic eye captures the situation, the heat and energy of the moment dictates the composition and the frame, but it is the finger pushing the trigger within a 100th of a second, that burns the just experienced sensation of that exact moment onto  film.

Garry Winogrand’s view was always focused on the person, the significant, the character and his contextually. The women he brought together in his legendary book WOMEN ARE BEAUTIFUL, were the favorite subject of his obsession. Winogrand did not regard the women as objects, as a projection surface of a male dominated society, but he succeeded in bringing their inner beauty to the forefront. Winogrand viewed the females not as objects, as a projection screen of a male dominated society, rather he accomplished to bring the inner beauty into the foreground.

A gesture, a look, the elegant posture of crossed legs, the sensuality and grace of a posture. Winogrand did not show us a beautiful woman, moreover he indicated  her authority as a female being, the true reason why any female may be sensed as beautiful. “Whenever I saw an attractive woman, I gave my best to photograph her. I do not know if the women I’ve photographed are beautiful, but I know the women look beautiful on my photos.’’

Peter Lindbergh, the undisputed star of fashion photography and inventor of the phenomenon “supermodel”, likewise, directs  his view towards the person not the model. “I wanna photograph real people, not the model. What I’m interested in, is to find a certain reality behind the facade.” Although his models such as Naomi Campbell, Linda Evangelista, Tatjana Patitz or Cindy Crawford are among  the most beautiful females in the world, Peter Lindbergh’s eye captured not the primary and superficial beauty features but focused on the person, the individual, giving them each their own authority. He never touches the dignity or degrades the model to become an object, but he preserves her integrity as a social being. “Preserving their infusible integrity is the aim of his aesthetic intentions.”

This may be one reason why Lindbergh’s black-and-white images stand out from the mass of the most soulless fashion photographs and why, since the late 1990s, they have entered the realms of international museums. The closeness to art manifests itself in Lindbergh’s attitude towards his subjects. The warmth and respect for the human being, coupled with the sensibility of a street photographer, shows a consistency in both his, and Winograd’s images, which is most striking. Not only is the similarly intense, almost physically graspable , but also the artistic discussion with the phenomenon of the street, points to the aesthetic and artistic proximity of these two exceptional photographers.

Peter Lindbergh’s series ON STREET was conceived as a fashion story and originated (since the end of the 1980s) mostly on the streets of New York. But Lindbergh deconstructs the stereotypes of the fashion world within his photographs solely through his anthroposophical gaze, his attitude. Lindbergh often uses the means of shadowing, overlapping, concealment, the knowing interruption of the dialogical observer axis, in order to, on the one hand, not create a clear focus, and on the other hand, to achieve a depth and width of field as one can see in Garry Winogard’s images.

This creation of a decentralization of the eye helps the viewer  make an independent decision. The photographer does not present the reason for his recording from a central location, but distributes the multiple contents over the entire area of the image. Similar to an Action Painting by Jackson Pollock, Lindbergh and Winogrand distribute attention over the entire image. Looking at the Winogrand’s photographs in terms of a dialogue, they can  roughly be ordered into four groups, the recognition of which allows an understanding of the codes of ‘street photography’. The origin of each photographer lies in the confrontation with the photographer-self as a protagonist and his counterpart as an antagonist. In so doing, he reverts back to the basic elements of the classical communication model. But unlike the assumed (and this is the qualitative difference), the artistic photographer understands himself as a sender, as a protective and cautiously active dialogue partner with the street, and the people who move on it. He comes to the realization that when all the invisibility strategies are applied – the short eye contact, a smile, or even a conscious dialogue is often more effective than an artificial snapshot.

The most consistent form of this communication therefore appears to be the images in which the sympathy of the subject for the photographer manifests itself, and so smiles at him. The second type of dialogue is the collection of a situation in which the photographer is perceived and the opposite partner confirms the admission in a quiet agreement. In the third instance the distance, the space between the dialogue partners is larger and the moment of the image is fed by a conspicuousness, an observation, a grotesque or comic moment, in which no direct contact between the pictured object and the photographer is recognizable. During this process, the photographer focuses on a snapshot, which he deliberately charges with a subtext, or by means of a special framing (in the case of Winogrand, who often refined his work using dynamic angles). The already mentioned fourth type of image includes the mastery of street scenes as a tableau vivant,  an Action Painting in which the photographer waits smartly for the moment of release until all the picture elements are distributed within his image section and are all in an energetic dependency with one another.

This royal class of “street photography” is dominated by just a few photographers. Here sudden references and connections of meaning are created by individual elements which originally have nothing to do with one another. These elements also spread over the entire image and prevent a fast capture of the image. However, by intensive observation the viewer suddenly becomes part of the picture and dissolves completely within its scenery. In mastering the codes of ‘street photography’ lies the quality of the pioneers, and also that of Peter Lindbergh, who instinctively, and with the necessary energy and sensibility for a situation, model, or person, can tune in and achieve an authenticity in his best shots that seem to set aside the border between staging and reality.