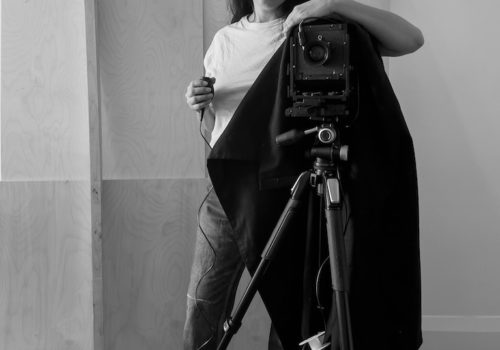 Le Bal announces that the Lewis Baltz Research Fund # 5 and # 6 are awarded to Tarrah Krajnak and Theo Simpson.

The Lewis Baltz Research Fund was created to pay tribute to American artist Lewis Baltz. It offers an annual grant to support the creation, realization and distribution of an artistic project, whatever its medium: book, performance, installation, video, film or work production of a digital experiment. The objective is to support projects distinguished by their intellectual rigor, in connection with the artistic approach of Lewis Baltz, close to political and societal questions. This year the winners were selected by the Lewis Baltz Research Fund committee (Diane Dufour, Teresa Luisotti, Michael Mack, Mark McCain, Slavica Perkovic, Thomas Zander) and the guests of honor (Urs Stahel, Sally Stein, Florian Ebner, Walter Moser and Matthew S Witkovsky). The Lewis Baltz Research Fund is generously supported by the Artworkers Retirement Society.

This year, LBRF # 5 is awarded to Peruvian-born artist Tarrah Krajnak. In her ongoing Master Rituals series, she tackles the problematic canons of modern photography, with a particular interest in the legacy of “master” photographers Ansel Adams and Edward Weston.

Krajnak uses the camera, her body and performance to engage in their work through erasure, writing and reconstruction. The resulting series consists of large format gelatin silver prints, book interventions, writings, videos and live performances. Both homage and criticism, the work opens a dialogue with these “father figures”, as well as a conversation with a contemporary audience. Krajnak is interested in Adams and Weston as thought-provoking figures on broader issues related to the American experience, particularly the ruins of modernity as she finds them in land and photography, as well as fantasies. on the preservation of the land, post-war development in the American West, and the essentialist ideas that stemmed from it about nature, beauty and “whiteness”.

Born in 1979, Tarrah Krajnak received the Louis Roederer Discovery Prize at the Rencontres d’Arles in 2021, and more recently the Grand Prix Hariban Award, Kyoto, Japan. She is also the recipient of the Dorothea Lange-Paul Taylor Prize awarded by the Center for Documentary Studies at Duke University. Her first monograph of  El Jardín De Senderos Que Se Bifurcan project was published on DAIS books in May 2021 and was recently named in MoMA’s inaugural list of the ten best photo books of 2021.

This year, the LBRF # 6 is awarded to English artist Theo Simpson for his project Toward the Metal which is the third part of a work in progress. The previous two chapters have explored the idea of ​​landscape, the passage of time and the evolution that underlies contemporary civilization, through the study of its history, geology, industry and economy. Toward the Metal uses this framework to imagine the world of the future. With all its irrevocable changes, the spiral of new technologies, new economic scales, environmental changes, the exploitation of the reserves of the planet, destabilization, globalization, division and imbalance which dictate the new conditions of existence. This final chapter will draw on an increasingly diversified methodology by expanding the places, materiality, scale and sources of research to explore new ideas and new sites whose significance are increasingly global, but also local.

Born in 1986, Theo Simpson mainly worked in the manufacturing industry before completing a Higher National Diploma in photography at Sheffield College (2008), then a diploma in photography at the Sheffield Institute of Arts. In January 2019, he was selected as the winner of the Jerwood | Photowork’s and in 2020 he was named as the first recipient of the Bernd and Hilla Becher advancement award for photography. Simpson’s works are housed in some public collections including the Fotomuseum in Winterthur and the Foam Photography Museum in Amsterdam.