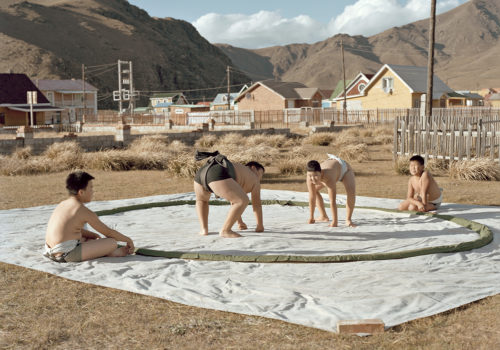 It is the immensity of Catherine Hyland’s landscapes that first catch your attention. In her photo of the mineral-stained hills of Zhangye Danxia Landform Geological Park in Gansu Province of China, human life can be felt escaping. These are extensive images where the horizon disappears in a haze of arid mountains. Here, no life, no vegetation to soften the impression of aridity and heat. It is foreign, it is sterile and it is dead: a wild landscape but at the same time it has been tamed by human consumption. There, to the right of the frame, is a fence, an observation platform. It is a landscape made for tourists. There is a road and this road leads back to civilization. It’s the quaint and the sublime wrapped in a contemporary Instagram planet, or (in China at least) a WeChat planet. There are fences and viewpoints all over the Hyland footage, marking the right place to see, the right photo to take. In another image of Gansu, an empty flattened viewing space with fenced trails going in four directions. On the one hand this fence represents an enclosure, on the other hand it recognizes the danger of the landscape. People are fenced for their own protection because it is a landscape that threatens human life. It is a deserted landscape that encroaches and invades and throughout history has brought death and destruction. In addition to taming the landscape with the enclosure, Hyland also photographs the psychological control of the land through the giant statues of historical figures that have been erected in the places she visits. In Lushan, a 128m high statue of the Buddha serenely contemplates the landscape, in Yuncheng, the warrior GuanYu looks at the mountains, while in Mongolia, a giant statue of Genghis Khan dominates the world he was destined to conquer. Her image of a memorial on top of a mountain in Mongolia’s capital, Ulaanbaatar, is not just a memorial to Soviet war dead. It is also a reminder that the earth does not submit to the desires of man. It rebels when you try to tame her. The only question is when.

is a photographer based in London. She graduated from Chelsea College of Art and Design with a Bachelor of Fine Arts honor and completed her Masters at the Royal College of Art. Her work focuses on people and their connection to the land they inhabit. Primarily based on landscape, it is rooted in notions of fabricated memory, grids, enclosures and national identity. Her large format images depict mankind’s attempts – some more effective than others – to tame its environment. An observation that led to both artistic and commercial influence, with residencies in places such as the Focal Point gallery in Southend for the RADICAL ESSEX program and exhibited work at the Month of Photography Los Angeles, Renaissance Photography Prize, National Portrait Gallery, Royal Photographic Society, GENERAL STORES, Somerset House, Design Museum in London, ICA & MAC in Birmingham. Her current projects shed light on humanity’s attempts to tame and transform nature, both past and present.

In the Mesnuls municipal park