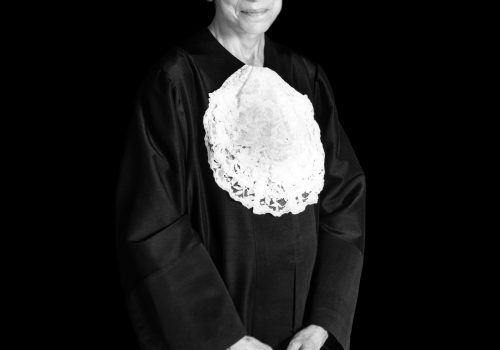 How do people come to feel so passionately about fairness and freedom that they will risk their livelihoods, even their lives, to pursue justice? A few years ago, I became fascinated by such people—people for whom the “rule of law” is no mere abstraction, for whom human rights is a fiercely urgent concern. I wanted to give a face to social justice by making portraits of human rights pioneers. I am a photographer. I understand by seeing. Peering through the camera lens, I hoped to gain an understanding of how they had become so devoted to the rights and dignity of others.

The subjects I chose live in a multitude of countries, in both open and closed societies; they range widely in their ancestry and social origins. Some have been advocates from an early age. Others came to their crusades unexpectedly, even unwillingly. Several were simply doing their jobs, and then realized that doing so can, under certain circumstances, be a radical act.

To photograph and conduct interviews with these people, I traveled to countries around the world, often accompanied by my teenage daughter, Emily. We had dinner in Johannesburg with Edwin Cameron, a gay, HIV-positive judge on the Constitutional Court who helped draft the South African Constitution. We visited Thomas Buergenthal at The Hague, one of the youngest survivors of Auschwitz, who was at the end of his 10 years on the International Court of Justice. We were given a tour of the European Court of Human Rights in Strasbourg by its soon-to-be-president, Sir Nicolas Bratza, after my portrait session with him there. We were followed by the Myanmar secret police after photographing and interviewing Aung San Suu Kyi at the National Democratic League’s headquarters in Yangon; my daughter learned more about the meaning of democracy in those few hours, I suspect, than she had in her entire year of United States history at school.

I met a number of my subjects in New York City when they visited for conferences or United Nations meetings. They would often come to my studio, where I could photograph them in natural light. With previous projects, subjects might ask where in my neighborhood they could buy a gift for a child or partner. None of the Justice subjects asked that. The only request I got was where they could find the entrance to Central Park. Many of them simply wished to walk freely in public, without a bodyguard, as they are unable to do in their own countries. Sometimes I would accompany them. Others preferred to walk alone.

Nader Nadery, a 38-year-old Afghan, preferred to walk alone. He told me that he had been accompanied by bodyguards for 15 months. “Now and then, I can’t stand it anymore and I escape them in a crowd,” he said. “They get very upset with me when I do that.” What I want to know is why he is the only one of his nine siblings who has not left Afghanistan. Why does he choose to remain at risk with his wife and young child? His brothers and sisters grew up with the same parents in the same period of history in the same country—what is it that makes him stay and fight? I listen; I look; I learn.

While many of these advocates are devoted to a cause with which they have a personal connection—a cause that is, in some sense, a birthright—equally impressive are those who fight to protect people with whom they have nothing in common, save a shared humanity. John Kamm told me that few of the thousand Chinese dissidents whom he has helped have ever thanked him. His efforts are often unknown to their beneficiaries. But he does not care about acknowledgment, let alone gratitude. What moves him is the core conviction that there are basic human values, such as freedom, to which everyone is entitled.

I sequenced the portraits to emphasize each subject’s individuality, rather than by place, time, or cause. The strength of character and conscience possessed by each person may have been determined, in part, by his or her upbringing, experience, and intellect, but there is something else that compels every one of them to persevere—a tenacity beyond comprehension.

The intent of this book is to pay tribute, not only to the courage of independent thought and action, but also to the dogged insistence that reason and fairness prevail. I hope I have been successful, through picture and word, in giving you a glimpse into the minds, hearts, and lives of some of the remarkable men and women whose efforts have launched and sustained a movement. Margaret Mead may have said it best: “Never doubt that a small group of thoughtful, committed citizens can change the world. Indeed it is the only thing that ever has.”