Lebanon, BEYroute: –The effects of war 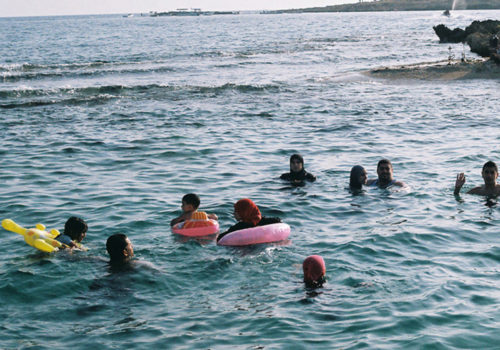 It is difficult to separate the influence of war from a population who has grown up with it. It colours memories, shadows everyday life, and among other things, shapes the art and artists who live through it. BEYroute explores the effects of war on the work of 8 Lebanese photographers who are inspired and affected by their experiences and memories of wars in Lebanon.

BEYroute is part of the larger Roaming Images project by the Macedonian Museum of Contemporary Art in Thessaloniki, Greece. Roaming Images draws projects from Cyprus, Egypt, Greece, Israel, Lebanon, Oman, Syria and UAE. The entire project will be exhibited as part of the Thessaloniki Biennale of Contemporary Art. The exhibition will also show at Beirut art-scene cornerstone Zico house.

“In the case of our BEYroute project,” says show curator Rola Khayyat, “I’ve chosen to engage a group of contemporary Lebanese photographers whose work addresses the notion of photographic representation of life under recurrent war – exploring new dimensions on representations of war, identity and memory.”

Roy Samaha‘s project statement for his series Inheritance and Dispossession includes a quote from the book Macumba by Serge Bramly which addresses this power of memory :

Once a witch in Brazil, told her apprentice, “You must understand, the memory of objects record and retain the actions of humans…., so that following generations inherit them. …but it was also asked of you to leave backwards so it is as if you had never come in. I already told you things and places possess a kind of memory. When you enter a closed space, a part you remains attached to it, you lose something.”

As if to emphasize the point, Tanya Traboulsi’s images document what remains in an abandoned factory occupied by militia men during the civil war. The walls record the reality and the mental escapes of the men they sheltered.

Photographer Rania Matar, in speaking about identity and her A Girl And Her Room series says, “I had intended to photograph teenage girls in the US. Quickly the project changed to include teenagers in Lebanon and in the Palestinian refugee camps as well. I decided that for the work to be personal to me, I needed to include what represents my own identity as a woman and a mother. Those were the cultures I personally experienced as a teen myself. I also chose the photograph the girls in their private surroundings as it gave me a very intimate window into their lives and own identities as teenage girls living in Lebanon now.”

Dalia Khamissy’s haunting Missing series “investigates the stories of the 17.000 people who were victims of enforced disappearance during the Lebanese civil war and the years that followed.” Speaking from personal experience Khamissy shares, “I was seven-years old when my father was kidnapped in 1981 for three days. Many years later I understood he was luckier than the others…(who) disappeared during the Lebanese civil war 1975-90. They were abducted or killed at the hands of different Lebanese militias, Palestinian factions, Syria, or Israel and their allies. The kidnapped were from diverse religions, gender, ages and political persuasions.”

“Ayla Hibri‘s work enters the home terrain and testifies to memory through spaces and objects.” says Khayyat. Rayya Haddad harkens back to Lebanon’s diminishing heritage through a nostalgic lens while George Haddad delves into the persistent thriving memories which inhabit Beirut’s camps.

Curator Khayyat also participates with images in BEYroute. She describes her subtle photographs as portraying “a post-war city through shades of the extraordinary in the ordinary.”

BEYroute attempts to cover a lot of ground by combining themes of memory, identity and war. Through the combination of work by some of Lebanon’s most high profile photographers mixed with some of the countries new talent, we see a broad – and at times fragmented – story of the place these photographers call home.

Though memory and identity may be intangible, BEYroute uses them as tools to offer insight into the photographers, the citizens and the beautiful mediterranean country with the sadly scarred past.