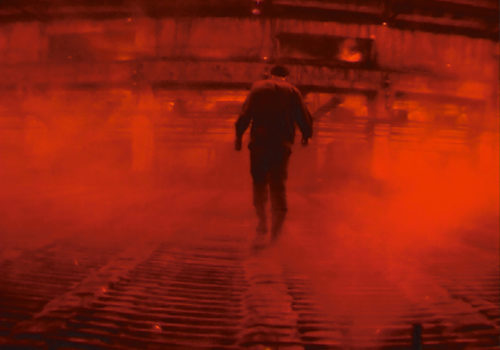 “I didn’t want to imitate life. The image in itself is already something concrete. I wanted to find a way to abstractly express a feeling, life itself. “- Wang Bing

LE BAL is exhibiting Wang Bing, one of the greatest contemporary filmmakers, with an immersive installation designed with the artist, on a proposal by the curators, Dominique Païni and Diane Dufour.

“One day in 1999, in North-East China, a 32-year-old man who had studied photography in an art school, grabbed a small amateur video camera and filmed alone, for almost 2 years, the disappearance of the largest Chinese steel complex. The result West of the Rails (2003), a masterful 9-hour film, experienced by many of us as the advent of a filmmaker and a unique way of becoming one with cinema. So begins the Wang Bing event.

It is through fragments cut from the living matter of 6 films, the most emblematic in our eyes of this being in a world of his own, that we have chosen to enter the work of Wang Bing. There a form is invented, there is imprinted the obstinate presence of Wang Bing in the footsteps of the Other, there the virtuosity of the frame bursts into a world in perpetual motion, there radiates humanity with this walking eye. ” – Dominique Païni and Diane Dufour

The exhibition received support from Wils Production. The book, co-edited on the occasion of the exhibition by delpire & co, Roma Publications and LE BAL, receives support from the CNAP and the Chantal Crousel gallery.

On the occasion of the BAL exhibition, a retrospective of Wang Bing’s films is organized at La Cinémathèque Française from June 9 to 24.

Find the program of the sessions here: https://www.cinematheque.fr/cycle/wang-bing-605.html

Wang Bing was born in 1967 in Xi’an, China. After studying photography at the Lu Xun School of Fine Arts, then at the Beijing Film Academy (BFA), he worked in television for a while before starting his career as a freelance filmmaker. He is revealed to the public with West of the Rails (1999-2003), a 9-hour trilogy that traces the decline of a large, dormant industrial site near Shenyang in northeast China. The film has received numerous awards and distinctions, including the Grand Prize of the International Documentary Film Festival in Marseille, the Robert and Frances Flaherty Prize of the Yamagata International Documentary Film Festival in Japan and the Grand Prize of the Lisbon International Documentary Film Festival. This first work established Wang Bing as a prominent figure in contemporary Chinese cinema.

At the same time, Wang Bing engages in the creation of video installations such as L’Homme sans nom (2009), Crude Oil (2008), 15 Hours (2017), Beauty Lives in Freedom – Gao Ertai (2019). In 2009, the Chantal Crousel gallery in Paris organized his first solo exhibition. In 2017, Wang Bing received the EYE Art & Film Prize in Amsterdam for his body of work. His films were the subject of retrospectives at the Centre Pompidou in 2014, at documenta 2014 in Athens and Kassel in 2017, at the Museo Reina Sofía and at the Filmoteca Española in Madrid in 2018, then at the Kunsthalle Zürich in 2019. His video installations are present in many collections, including those of the M + Museum (Hong Kong), the Center Pompidou (Paris), the Museo Reina Sofia (Madrid).

Today, Wang Bing shares his life and work between China and France.