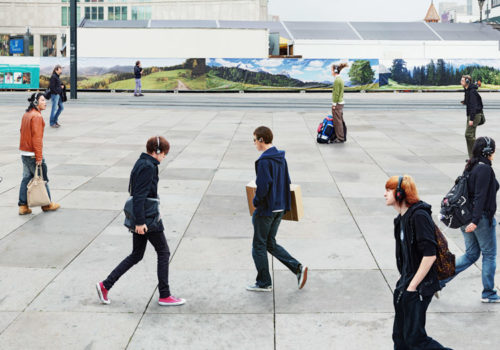 This inaugural exhibition signals the place of the collections of the Musée de l’Elysée in the new programming devised by Tatyana Franck: Anonymity Today weaves a common thread binding a variety of outstanding works, some of which were specially acquired for the occasion. The subtitle of the exhibition, A Short Photographic Grammar of Urban Life, coined by the curator Pauline Martin, situates the spectral gaze in the field of sociology, since many anthropologists have studied the modern city along with the solitude, anguish, and exclusion it epitomizes. Photographers have tackled the urban jungle through recurrent formal strategies meant to foreground the city’s intrinsic qualities. However, the individual’s isolation in the crowd may also be a source of freedom—a paradox underscored by several artists. Sociability thus remains possible within special-interest communities or through accidental encounters. New tribes come into existence offering novel social configurations and overcoming the initial paradox.

The exhibition is subdivided into seven sequences, and opens with Stéphanie Couturier’s photographic series Urban Archaeology and Hans Wilschut’s series Hermetic City, which foreground the individual’s necessary adaptation to a constantly evolving metropolis and progressive urban densification. What place can the individual occupy? The next question then is, can the individual preserve his or her privacy in the face of growing homogeneity of their environment and predefined social types, as exemplified by Raphael Hefti’s beauticians, trapped in consumer logic, or Aimée Hoving’s Geneva lawyers captive to their own power? But there are those who resist the social steamroller, such as Mexican street vendors whose ramshackle carts are nevertheless creative.

Exacerbating the loss of bearings to the point of potentially anguishing and mortifying disembodiment, some photographers deploy formidable conceptual tools, such as blur in Alexey Titarenko (Petersburg crowds) or Miklos Gaal (minuscule human figures); digital and virtual manipulation (Second Life avatars by Richard Kolker or the world of cinema by Kristoffer Axen); or spectrality, as in the images of undocumented migrants x-rayed by the French border control at Calais — a chilling sight that brings to mind phantom images, a concept central in Georges Didi-Huberman’s work.

These intense images give way to the “comfort of the incognito” described by the philosopher Colette Petonnet and embodied in three video loops by Cyrille Lallement (urban simulacra), Floriane de Lassée (the place of the viewer/voyeur), and Nadja Groux (traffic scenes captured from her window in Harlem).

Relinquishing anonymity implies for the artists a humanizing gaze at misery (Thomas Kern’s homeless people) or the tragedy of a terrorist act. Nameless inhabitants thus experience an unprecedented surge of solidarity on September 11, captured by Kevin Bubriski and Frédéric Sautereau, to the point of exalting the figure of the ordinary hero, as shown by Jonas Fredwall Karlsson and Steve McCurry (a firefighter climbing a ladder). Intimacy may also end up being violently rejected by the subject, as was the case with Neji Bensalah, a commuter surreptitiously photographed in the New York subway by Luc Delahaye, who took the artist to court and lost.

Exclusion in the city comes in different guises, from temporary or permanent insecurity (the home(less) by Nicholas Prior or urban cave dwellers in New York by Andrea Star Reese) to the loneliness of the rich and privileged (Chinese only children by Su Sheng or Jewish immigrants in Los Angeles by Anoush Abrar).

Is belonging to a special-interest community the answer to this specifically contemporary dilemma? Intersecting or congregating around select activities, as in Lawick/Müller (audio-guide), socializing at work (a photocopier by Julien Benard) or during one’s commute (Pablo Zuleta Zahr), or coming across the reality of a body other than one’s own (Valérie Jouve’s Grand Littoral), all seem ways of slipping the grasp of escalating dehumanization.

The utmost consistency of this city stroll, both chaotic and fragile, tragic and singular, leaves a long-lasting impression, like a bittersweet melody.

”In the Image of the World”