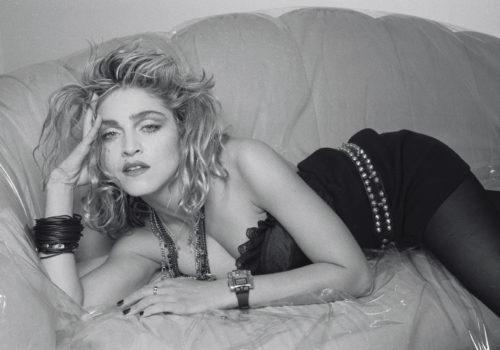 Born in 1974, I belong to the first generation of Madonna fans, whose debut in 1983 had the effect of a real earthquake: musically of course, but above all because the arrival of this character broke the rules!

Half-naked, disheveled, with fluorescent mittens, leather bracelets and crucifixes galore, she was a major cultural shock for millions of kids and teenagers, as well as a source of inspiration and great joy. Outraged parents, exacerbated sexuality, fans in a trance… A dream for teenagers!

After years of reinventing herself to become the star that we know, what a joy to discover the freshness of this series directed by Kenji Wakasugi in 1985 in Tokyo during the first Japanese stay of the Madonna who presented her second album at the time, “ Like a Virgin”. The photographer only had 45 minutes to capture this new artist for Playboy magazine. But it didn’t take much more to capture forever the birth of this icon, her insolence, the intensity of her gaze, the power of her character and her ironclad determination.

I discovered this partly unpublished series thanks to the research work of Nick Groarke, an English publisher who found these images and decided to publish, in limited edition, a book of this session: “Adore”. Very quickly then, I had the desire to see these images in real life, to have the prints in hand and to share them with the many other fans or those curious of Madonna.

37 years after this shooting, the images take on a whole new dimension with regard to the career of the star, the time spent and successive fashions. It is above all her beauty that appeals to me, as well as her absolute mastery of her image, already! I met her once and it was that look in particular that struck me: her undeniable strength. The same expression that I found in this unique testimony.

Thanks to Shoko from Ippodo Gallery and Nick Groarke from NJG editions for their support.