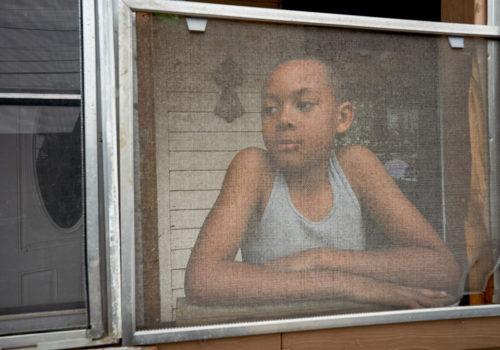 This publication by Kehrer Verlag, both alarming and poignant, sheds light on unresolved racial injustices in the time of Black Lives Matter.

The Mississippi Delta has been called “The Most Southern Place on Earth”, a region of layered histories that collide with each other on a daily basis. It is a place that defines America like no other part of the country – a culture entwined with slavery, poverty, and political and economic oppression. It is the land that gave birth to the creative genius of B. B. King and to the murder of young Emmett Till on August 28, 1955.

Shadows of Emmett Till seeks to probe that complex past by observing the many ways the shadow of Till’s murder, still hangs over the Delta. This work breathes the Delta air and seeks to frame the region and its people in a 21st-century context, at a time when white America may be starting to finally come to terms with the sins ofits past. Along the way,pastspills into present,withparallels to George Floyd and so many others.

President Joseph Biden signed the Emmett Till Anti-Lynching Bill on March 29,2022,makinglynchinga federalhate crime.Beginning in 1900, the United States Congress had previously tried and failed to pass the bill over 200 times.

From the text I Was Raised in a Sundown Town. I Just Didn’t Know It by Bob Newman:
Since coming to the Delta, the legends and accounts of what hap- pened to Till in this storied placehavehadaprofoundimpactonme. (…) I cannot know what it is like to be Black. But I do know what it felt like to walk into the shed where Emmett Till was beaten and likely killed, (…) and to see the bullet-ridden sign marking the site on the river where his body was found.

From the text The Past is a Foreign Contry by W. Ralph Eubanks:
The power of photography lies in its ability to fill in gaps from the past that many seek to erase through their words, deeds, and actions in the present. In Shadows of Emmett Till, the black-and-white historical images from the past serve as an entry point into the brilliant contemporary color images of the Mississippi Delta and its people.

American photographer Bob Newman began making photographs after a career in medicine. He is drawn to capturing images that document the culture and challenge within marginalized communities and to long-term projects that require time and in-depth involvement with his subjects. 2021 International Photography Awards (IPA) named him as Deeper Perspective Photographer of the Year and chose his images as a Jury Top Five Selection. He received a LensCulture Critic’s Choice Award and was named a 2021 Finalist for Photolucida Critical Mass, among other recognitions.

W. Ralph Eubanks (b.1957) is an American author, journalist, and professor. He was director of publishing for the Library of Congress and editor of the Virginia Quarterly Review at the University of Virginia.
Currently he is the Carl and Lily Pforzheimer Foundation Fellow at Radcliffe Institute for Advanced Study at Harvard University.
In 2007, he was honored with a Guggenheim Fellowship, in recognition of his book Ever Is a Long Time: A Journey Into Mississippi’s Dark Past.

Magdalena Solé is an award-winning photographer, teacher, lecturer, and photo editor, known for her sensitive expressions of culture through distinctive color artistry. Her work has been exhibited internationally and is represented in major museum collections.