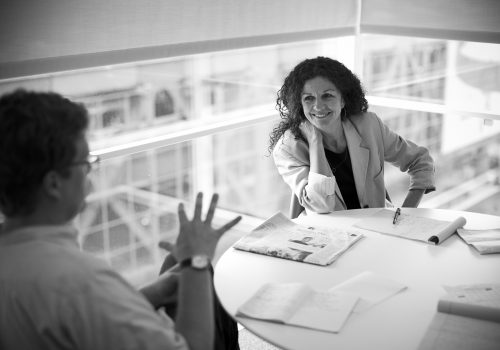 For more then 30 years, The New York Times Magazine has played a determining role in photography in the media, via commisions and as well as publications of work of all types, from photojournalism to fashion photography by way of portraits. With Photographs of the New York Times Magazine, Kathy Ryan, director of photography for the weekly, presents the behind the scenes of her work as well as those who accompany her. There we discover the methodology of the publication : the original idea of the page in itself all the way to the production of the project and the conditions of the shoots or photographic reportages. From her beginnings at the New York Times, Kathy Ryan worked her mentors.

She proposes the projects to her photographers, she works with them, debriefs them and contributes to their progression. Her analyses are of a crucial importance : she decides on images that influence the masses and the preception of an event, must channel her emotion, she plays an role in the evolution of photographic trends. Her selection of the latest major works in the history of the magazine informs not only on the nature of the images published but also on the state of photography since the turn to digital. The exhibition, made in partnership with the Aperture Foundation, comes to Arles this summer before the eponymous book will be published this Fall 2011.

Kathy, can you describe in detail the content of your exhibition ?
It is a view on the best photographs published in the New York Times Magazine for the last 30 years. The 11 different installations show magnificent images that attempt to reveal to the spectator the process of the publication of a photo in a magazine, and the surroundings of the decor of the metier of the photographer. In the section dedicated to photojournalism are for example the work of Lindsey Addario covering war, as well as the writing of Elizabeth Rubin, the journalist with whom she had often worked in Afghanistan, Iraq and Darfour. It is thus possible to catch a glimpse of the intimate relation that links these two reporters. Another section is dedicated to fashion photography, a discipline that I appreciate in particular to have attempted to track the unpredictability of the photographers that I sent on assignment : Jeff Koons, Lee Friedlander, Roger Ballen, etc. All of these stylish images have in common the fact that they were made by photographers who are not part of the world of fashion. In regards to the biggest installation, the work of a special issue on Times Square made in 1997 is presented. At the time, I had sent several photographers to document this place that was going through a big change : the pornographic theaters and sex shops were disappearing, making way for big commercial shops, it was becoming safer.

What do we learn about the behind-the-scenes aspect of production at New York Times Magazine ?
On the bottom of the photographs are as well a certain amount of amusing anecdotes, philosophical or technical, from the photographers, art directors, editors, or even the people that are in the pictures. Also exposed are publication clippings, lists of shoots, working prints and contact sheets, videos. We can therefore see images but also understand how they were produced and published. When we come upon the work of war photographers, these little stories show with intensity the atmosphere that they live in daily.

How did you compose the selection of photographs ?
Certain ones were a choice from the heart, others were selected in diligently going through all of the issues published in the last 30 years. I realized the immediacy in which the images were produced. Even with perspective, it was not necessarily easy to analyze the past publications. My work everyday is to always look ahead.

What is the best quality of a photo editor ?
The main difficulty in this field lies in the fact of imagining the best coverage visually of an event and to know the photographers well enough to be sure about sending someone capable of bringing back perfect images. This requires a creative part as it is essential to suprise the reader. It is also important to work very quickly and to be able to rapidly make good decisions. By definition, one must always respect the deadlines.

How does someone let themself be guided in the selection process of images that will decide how the world perceives a scandal, a war or an accomplishment ?
I always try to make the best decision. With time, the eye becomes hardened but we always ask ourselves the same questions : Is it good ? Is it strong enough ? Is it too provocative ?

There is then in this work an extreme responsibility partly unconscious, depending on the personal feelings of every photo editor…
Absolutely. That is why every magazine has a point of view and a personality. Its photo editor must at the simultaneously be attentive and to have its own opinion. He is flooded with images all year but must keep a sensitivity, sometimes hard to build. When I watch the images that I chose for the book, I discovered that I had been driven by an otherness or cetain dreamlike state. When a portrait is really good, its because its fixed regard, timeless, absorbs you. When a documentary photo attracts you, it means it has succeeded in signifying something important, that transcends the scene to reach the symbolic and surprise you.

What has been the major change since your arrival to the magazine 25 years ago?
Internet and the possibilities that new media brings, digital photography, of course. That has changed a lot, the way in the studios, where photographers take pictures in burst, looking at their screens every two minutes. On the one hand, digital has interrupted the sometimes beautiful complicity that they could build with their subject. On the other hand, that allows them to correct mistakes and to liberate other creativity, that of the particular effects from digital retouching.

Why do some photographers from the film generation still prefer their old 35mm Leicas?
I’m not sure why. There is however an undeniable purity in film photography, their atmospheres, the grain, the natural.

How is the magazine doing in economical terms?
Not very good. I would love to have more advertising.

How do you see the future of press photography?
Moreso good. Time, Newsweek and the New York Times Magazine still devote entire pages to photography. But the future is on the Internet. On our photo reportages in diaporamas, the number of visitors is growing monthly

What are you working on today?
We need to photograph a world class swimmer whose name I cannot state. I am trying to find an original way to shoot him but I have not yet found a good idea!

The exhibition, co-curated by the Aperture Foundation and Lesley
Martin, will arrive in Arles this summer prior to the eponymous book’s
release in the Fall of 2011