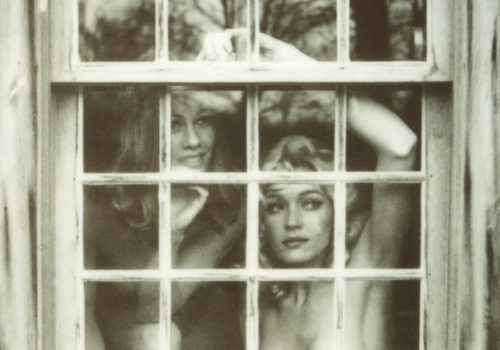 With this exhibition Kahmann Gallery welcomes four new photographers. First of all the Canadian Marianna Rothen and the Italian Costanza Gastaldi. Two very talented photographers who have built up a strong body of work in recent years. Then two Scandinavian photographers: Jonas Bjerre-Poulsen from Denmark and GT Nergaard from Norway. They are two very experienced aesthetic photographers, who both recently published their first important monograph. The work of the four photographers together form a very diverse, but at the same time balanced exhibition.

Costanza Gastaldi’s photographic wanderings show a journey through often dark, misty landscapes. The viewer’s gaze is invited to look beyond the mere image of breathtaking nature. Mist plays a stimulating role here. Besides the fact that parts of Costanza’s landscapes are often shrouded in a natural mist, the technique also creates a certain mistiness. These elements stimulate the imagination of the viewer, who, like Constanza, comes spiritually in close contact with nature.

Costanza’s landscapes are the result of her search for the mental landscape. This search brings her to the most extraordinary and remote places. The discovery of new landscapes of rare beauty and extreme conditions feeds her mental landscape. In her photography, she strives to capture both the physical and emotional reality. There is always a tension present between the fertility of life and the elusiveness of death. Constanza’s work is highly personal, vulnerable and melancholic, but at the same time recalls the power and grandeur of nature, in which man is dwarfed.

Costanza lives and works between Turin and Paris. In Paris she studied and graduated from both the Gobelins School and the Sorbonne University (Arts Sciences). Her work has been exhibited internationally at numerous occasions.

Marianna Rothen is a Canadian artist who is based in New York. After becoming a model as a young teenager, Marianna spent several years traveling, working and documenting the experience through photographs. Influenced by the need to reclaim her own image, Rothen now uses her photography and films to explore and deconstruct conventional conceptions of female beauty and gender politics. Using a mix of traditional photographic processes with digital media she creates images that evoke a sense of mystery and discomfort.

Rothen has made three bodies of work, translated in photo books and films, in which the development of her vision of patriarchy and empowerment are addressed. In the first series, Snow and Rose & other tales (2014), she constructed a richly resonant dream world where empowered women are free to be themselves in an environment entirely without men. Shot in a retro style, the images revel in natural unselfconscious nudity and contagious smiling confidence.

In her second body of work, Shadows in Paradise (2017), Rothen builds up a subtly different mood, where uncertainty and insecurity reenter the psychological terrain and introspection takes hold. While Rothen’s women still inhabit an all-female domain, there is much more implied tension. We voyeuristically watch as the scenarios start to unravel. Scenarios where the realities and perils of life intrude on the idyllic freedoms of the setting we saw in Snow and Rose & other tales.

In Mail Order (2018/2019), Rothen’s third body of work, men are introduced for the first time. They are literally objectified, turned into objects, one semi-fictional woman’s projected idea of masculinity and maleness. As she does in all her series, Rothen features in her own work. Though her character is alive, she is just as fake as the men; her gender is as much a performance as theirs. The crucial difference is they are not human. Rothen, as photographer, and Rothen, as model, wields no actual power over these male dolls, no actual men are exploited for her play. She suggests what it is like to be a woman who is looked at by men and who is powerless; whose identity is puppeteered by the patriarchy. The dolls start to become ridiculous, risible. They have no depth, no story – like so many of the female leads in Hollywood films. As a former fashion model herself, Rothen’s own experience in front of the camera also shapes the way she inhabits and examines this position. By staging these absurd situations, she strongly criticizes the fact that people are still products of patriarchy. This makes her work an important advocate of women’s empowerment.

The Norwegian photographer GT Nergaard started taking pictures at a young age. He saw photography as his calling and therefore went to study at the Brooks Institute of Photography in California in 1989. Here he laid a solid, highly technical foundation for his work. After his education, Nergaard returned to Norway, where he worked as a fashion, editorial and advertising photographer. Parallel to this he taught at The Norwegian School of Photography, which he co-founded in 2001.

In 2010, Nergaard left commercial photography entirely, to focus on his personal work. He realised that he had to find his way back to the reason why he had chosen photography in the first place and find his photographic identity. He found this identity at the crossroad between fiction and reality. Some of his images are observations, others are staged situations. He creates a narrative, inspired by events that are closely linked to his own life. The themes of youth, freedom and vitality are central to his work.

In his work, Nergaard always starts with the location as his main inspiration and builds the concept and stories from there. As he has always had a strong fascination for the sea and lakes, water is usually the main element in the location he chooses. As a Norwegian living far north, it is according to Nergaard difficult not to be influenced by nature, which is always very close and a dominant part of the country. In comparison with many other countries the contrast is enormous, both in landscape and climate. Winters are cold and long often without daylight, in contrast to bright summers where the sun never sets. In Nergaard’s opinion, this contrast adds something unique to the way northerners think and behave, which has influenced Nordic artists throughout all eras. Their passion for the sun is difficult to understand for someone who has not grown up in the cold north.

Nergaard’s work is strongly influenced by Vitalism, the artistic impulse which made a strong impact in Nordic art in the years 1900-1930. Among artists who are connected to this impulse we find Edvard Munch and Gustav Vigeland, both representing a distinctive period in which the nude body, nature and health stood in the center, and the sun’s cleansing power was one of the central themes. All these aspects are present in Nergaards work, in which the viewer can lose oneself.

Fragmenting bodies, architecture and nature, the Danish photographer Jonas Bjerre-Poulsen reinvents the forms around him as luminous images, creating intimate and enigmatic juxtapositions that invite the viewer to look again and imagine what lies beyond the frame.

Trained at The Royal Danish Academy of Fine Arts in Copenhagen, He mixes his spatial sensibility and understanding of shape with conceptual thoughts and visions that bring creative projects to life. Bjerre-Poulsen has a strong vocation for creating thoughtful works that stand out in an understated, refined manner. For him it is all about balance. Balance between richness and restraint, between order and complexity. Minimalism that acquires softness and visual matter that assumes haptic qualities.

Bjerre-Poulsen has a passion for phenomenology, the philosophical study of human experience.

As human beings, we tend to understand the world through a viewpoint that is related to our own body, our own symmetry and scale. But all forms in the universe are structured around the same patterns—from a molecular to celestial scale. When we understand life from that perspective, we understand that humans, nature and the built environment are all part of the same geometric and structural patterns. We translate what we perceive in nature and how we understand our own bodies into what we see in the arts.

The sphere is a recurring motif in his work. It is an image that according to Bjerre-Poulsen could be used to understand life. It is a strong symbol that defines the most intimate of spaces; the womb, relationships between people, and that between man and God. The balance of spheres is what makes nature predictable and mathematical. Geometry is an abstract system of formalization that makes sense to us—squares, triangles, circles. This understanding is incorporated into how we physically construct and mentally understand the world.