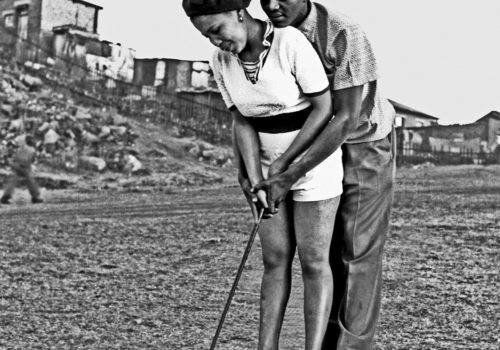 There are so many things to say about Jürgen Schadeberg’s all-round work. His many successive offices-studios-laboratories which served him incidentally as home constantly changed place according to the successive projects he took head on. This is how he spent a few short years in London, in the South of France, in Berlin and in Spain. All with a total frenzy of work where he linked photographic projects, exhibitions, books, films, etc.

The man was discreet but by no means shy, as his wife tells it very well, the home, or rather the headquarters of his activities, looked more like a station hall with constant activity and full of people.

I will put you in context to take you to the “townships” of apartheid South Africa. To understand how Jürgen the reporter photographer was able to enter inside these circles, integrate, moved aside (in appearance), testify and distribute images all over the world. A real performance from Great Reporter. Nothing provocative, nothing extraordinary, nothing exaggerated in the images that are spread before your eyes. Just the impossible made possible, just the invisible made visible, just the unacceptable that enter into your consciousness.

I want to show you this superb mastery of photographic techniques that all great documentary image enthusiasts share and refine with each new project. Take a serious look at each of the photographs, you are into the scene, into the subject, into the story, the photographer is so discreet that he became invisible and finally supreme mischief, the camera moved by itself. How did this sorcerer manage to train our imagination and our feelings in this closed and impenetrable environment of apartheid recluses?

I have not quite finished with these photographs by Jürgen Schadeberg. Because if his camera seems to move by itself in the mind of this bullied black community, the essential should not be lost. The compositions, the framing, the range of tones, the sharpness are totally mastered. The photographer personally took care of the prints. In this case he is not a very talented photographic shooter who highlights a photographer reporter, it is Jürgen who makes Jürgen Schadeberg.

For the messages, the cries, the emotions, the dignities, the joys and the sorrows, the sufferings and the hopes, I leave each of you according to his own sensitivity to appreciate or overlook the works of testimony which are left to us.

Let us take care of this heritage of an area, an era, an idea, … an heritage for the people of tomorrow.

exhibition until the end of February 2021