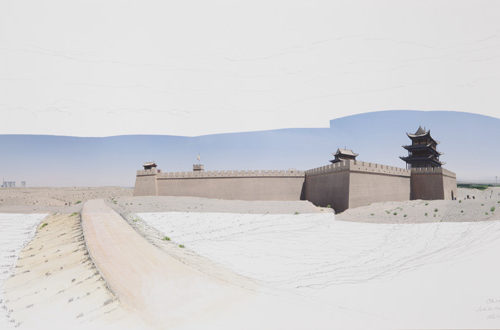 This project draws on photography taken along the mythic silk road during extensive travel, mostly on land (more than 13 000 km), beginning in Shanghai and taking us through numerous cities, historical sites, landmarks and territories in China, Kazakhstan, Uzbekistan, eastern Azerbaijan, Germany, Russia and Byelorussia.

This long and memorable voyage resulted in a vast body of photography that attempts to accurately express the confluence of space, time and existence observed all along the extraordinary land and cityscapes that we traversed.

Our itinerary, which purposely overlapped with some of the routes taken by Marco Polo and Baron Von Richthofen, revealed many emblems that once seen could not be forgotten. The constant challenge for us was to capture the vast accumulation of information and the varied images encountered, in which we discerned recurring signs that help form a redundant memory on which is based the silk road’s temporal transcendence.

Each new encounter pointed to the legendary caravans while also reflecting new forms of connectivity for current and future transcontinental trade. The more we submerged ourselves in the remote cities that we visited, the more we understood our prior stops, each new city revealing aspects of those that preceded. We moved forward along an open road, informed by a retrospective eye, searching for the proximal future made visible through the permanent traces left by a magnificent past and constantly evolving as we moved forward.

In each new and spectacular landscape or city photographed, we became aware that the importance of each site added to the beauty of its surroundings, a connection impossible for us to capture with our cameras. That is why we have supplemented our photographs with drawing and painting; in order to capture with an illusion, the intangible aspects of this mythic voyage.

Our challenge as artist-travelers was to keep hold of the thread connecting us to those oases imagined by traveling-merchants during moments of total delirium and exhaustion in a quest to transport goods, knowledge and beliefs- a feat beyond the limits of the humanly possible leaving in its wake a trace of hopes, fears, ambitions and the desire to dominate.

Thus, in the works that we have created the “arrival” and “departure” figure as key leitmotifs representing the omnipresent road, without which the cities that we visited would not have developed, nor the life that evolved in them and in their surroundings.

The very cities, landscapes, people, cultures, religions, languages and economies that we encountered have the potential to give life to the perennial dream of planetary connectivity. We hope that in so doing the fragile balance between space, time and existence achieved across centuries will be preserved in this legendary silk road.