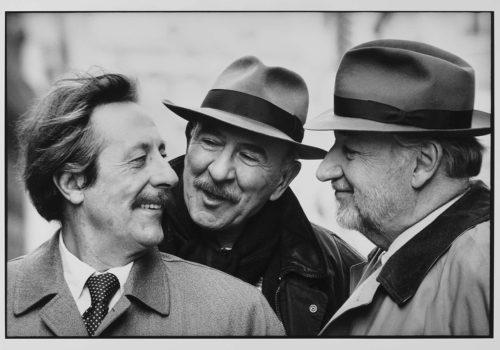 Photo reporter, portraitist for major magazines, set photographer, Luc Roux has immortalized the most emblematic movie stars and the greatest filmmakers of our generation. Actresses, actors, filmmakers from the 1980s to 2010, all crossed paths with the photographer and posed in front of his lens. As part of Paris-Photo, the Jérôme Seydoux-Pathé Foundation celebrates the work of this renowned artist and exhibits his most beautiful shots from November 8th, 2022 to March 4th, 2023.

In the exhibition spaces created by Renzo Piano, the Jérôme Seydoux-Pathé Foundation is preparing to unveil a hanging of unique photographs. For the first time in Paris, photographer Luc Roux presents a selection of portraits of actors and directors as well as stills from films. Much more than a dive into the archives of a photographer, this exhibition is a real immersion in the heart of cinema.

First a photographer for Première magazine from 1983, Luc Roux then participated in the creation of Studio Magazine in 1987, with Marc Esposito and Jean-Pierre Lavoignat. For nearly twenty years, he was the official photographer.

The quality of his images, his accurate, sensitive and benevolent gaze, his talent for capturing privileged moments which reveal the truth of the actors and also the magic of the cinema in the making and the links he has been able to forge with artists and technicians have done a lot for the reputation of Studio Magazine.

Luc Roux, who defines himself as much as a portrait as a photo reporter, thus worked with most of those, French and sometimes foreign, who marked the cinema of those years. He also sometimes regain his freedom from the magazine to cover certain shootings, in particular those of Bertrand Blier, Patrice Chéreau, Maurice Pialat, Alain Corneau, Michel Deville and Claude Miller.

Some of his photographs have even become unforgettable film posters: Sous le soleil de Satan, Tous les matins du monde, Une femme française, La Reine Margot, among others, and of course La Petite Voleuse which won the César for Best poster in 1989.

After leaving Studio magazine in 2004, Luc Roux devoted himself to set photography. He was notably a photographer on the set of films by Bertrand Blier, Danièle Thompson, Tonie Marshall, Liza Azuelos, Daniel Auteuil, Emmanuel Bercot and Thierry Klifa.

Initiated by the Angoulême Francophone Film Festival in 2020, the exhibition Luc Roux, le cinéma au cœur presents a selection of portraits of actors and directors, posing or at work.

The hanging, imagined by the photographer himself, with the help of Jean-Pierre Lavoignat, highlights photographs from films, posters, magazines, video extracts and … cameras.

Luc Roux, le cinéma au cœur invites the visitor to discover the process of creating a photograph, from the shooting to its publication. The exhibition, a real journey over thirty years through the work of a photographer, makes us relive the greatest moments of cinema from the years 1980-2010. It is an opportunity to observe and understand the approach of a press and film photographer, who has become, thanks to a real sense of time and framing, a figure both discreet and essential ion the French cinema.