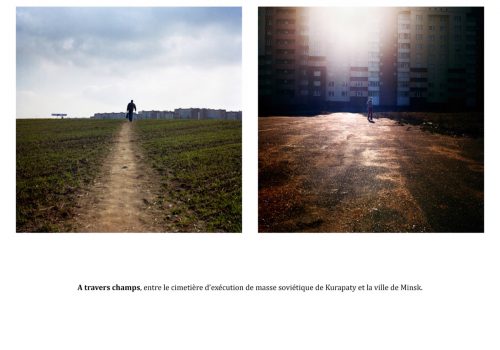 Death and life, creation and destruction, is the natural cycle. But in Belarus, the annihilation seems to be repeated and respond faster than elsewhere leaving little time for the country to recover, understand and break its chains. Yesterday’s influence is often imposed; the similarities, irremediable?

At the time of the commissioning of the new Astravets nuclear power plant 32 years after the Chernobyl disaster, of which the Belarusians are still the first victims, this series is working on the traces of the history of the country in order to enlighten a little better his present.“Memory is constitutive of identity… It is precisely the discontinuity, the intermittency that best characterizes the Belarussian collective memory.” Tatiana Glukhova, The Belarussian Identity: Collective Memory and Contemporary Constructions

Recent chronology:
1793 The territory of Belarus (Polish-Lithuanian Commonwealth) is annexed by Russia.
1812 Battle of Berezina, defeat of France allied to Belarusians against Russia.
1915-1918 World War I, the front line Germany-Russia passed through the territory of Belarus (Rakow).
1917 October Revolution in Russia.
1918 (March) Proclamation of the Belarusian People’s Republic.
1918 (December) Liberation and annexation of Belarus by the Red Army.
1937 Soviet mass executions, 250,000 dead in Kourapaty, a suburb of Minsk.
1939-1945 World War II. Invasion of Nazi Germany: 200 fully razed villages (Khatin), more than 2 million killed. 100,000 Jews in the Minsk ghetto, the Belarusian urban population, 40% Jewish before the First World War, disappeared 90%.
1944 Soviet troops liberate Belarus and Minsk is destroyed 90%.
1986 (26 April) Explosion of the Chernobyl atomic power plant with 70% of the radioactivity returned to Belarus, 200 000 deaths and 2 million inhabitants contaminated.Creation by the Soviet Army of the exclusion zone of Chernobyl, 30 kilometers around the power station straddling Ukraine (40%) and Belarus (60%).
1991 Collapse of the USSR and creation of the Republic of Belarus. The country is reappropriating its historical symbols, the Pahonia and the white, red, white flag.
1994 (to today) Election of Alexander Lukashenko, nostalgic of the Soviet era. Restoration of the Soviet flag, kolkhozes and KGB.
2018-2019 Commissioning of the new Astravets nuclear power plant built by Russia.

In a century half of the population of a country has disappeared and part of its population is still sick. Perhaps it is impossible to do justice to everyone. It is easier to forbid criticizing, understanding and explaining, even the past.It is easier to impose the construction of a nuclear power plant and it is so simple to find who will defend it: army and police do not refuse anyone, a safe job, accessible to all and much better paid than professor or surgeon.

Meanwhile for the revival, the new generation who didn’t known the Soviet time listens to rap and watch American series on his iPhone, the story is repeated in silence.The Astravets nuclear power plant will be commissioned this year.Its construction was decided in 2012, in full crisis of Fukushima and nobody has ever asked their opinion to the inhabitants of the country the most bruised in the world by a civil nuclear catastrophe.Oleg lives in Kamarin, on the edge of the forbidden zone. He said to me with a smile: “That way they will succeed in killing the second part of the population.”