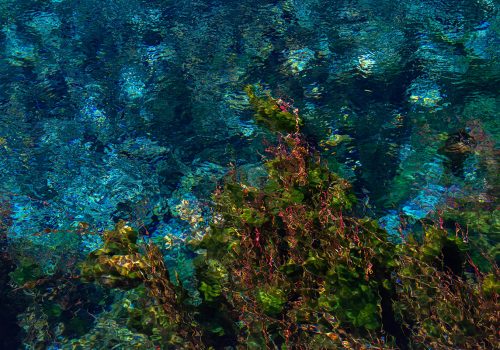 THE SOURCES of Golden Bay in New Zealand, near the small town of Takaka, are some of the purest on the planet – we come close to “pure water”. With a visibility of around 80 meters, the transparency of this water defies the imagination.

The purity of the water and the intensity of the New Zealand sun create unique aquatic landscapes. In these photos without any retouching, the bottom is sometimes five meters from the surface and yet appears to be only a few centimeters away.

These sources are a Maori sacred place, a “Tapu” (this Polynesian word imported into the West by Captain Cook gave our “Taboo”).

L’AIGUEBRUN is in the heart (the heart?) Of the Luberon. The waters of the Aiguebrun wander underground for a while before reappearing in the valley.

Throughout the Aiguebrun, cults and cultures have followed one another for at least 100,000 years. Rocks and caves bear traces of this human activity around the water.

L’Aiguebrun occupies an important role in the work of the writer Henri Bosco.

EVERY PRINT is an interpretation and each print is different, especially the silver prints. But these photos are not faked.  Each picture is a perfectly real vision of the place and the moment … whatever reality or fiction anyone finds there.

MY GOAL is to offer the spectator the possibility of a vision “beyond” the surface, and to draw on his own sensitivity to interpret what he / she sees, whether it is water, a shape. , or maybe just an emotion. Hence the question of infinite reality: do we have a choice of reality?

CROWNING ACHIEVEMENT of this exhibition, the photo “Paris, -25 meters” asks this question in an essential way. Taken 25 meters underground, under the water reservoirs of the Montsouris park in Paris, it represents a staircase. When turned around, it reveals a profile. Of the staircase or the profile, which is more real?

Immersed in artistic expression from a young age: son of a painter and raised in a family of musicians, Jean-François Robert developed a passion for photography at the end of his childhood.

His insatiable thirst for art led him to travel in Europe at a young age, mainly to visit the painting galleries, then to choose a career as a musician in the demanding world of classical music. He also writes novels and collaborates as a musicologist with the newspaper Le Monde. At the same time, he exhibits his photographic work. Creative and sharp, he navigates between different passions with the exploration of the border between fiction and reality as a central axis.

By asking questions of infinite reality, and of art as an unveiling, the photograph “Paris, -25m” (1991) quickly gained fame in Parisian artistic circles. It was published in 2003 with a text by French writer Pascal Quignard.

For the past few years, he has focused on abstract photography around water. Rigorously real and without special effects, this work beyond the surface provides a bridge to another vision, through the search for shapes, textures, movements and emotions.

JF Robert’s photographs are exhibited in galleries and private collections in Paris, London, Geneva, Berlin, Brussels, New York, San Francisco and Auckland. In 2017, the Springs, Golden Bay series is part of the Zen exhibition at Galerie Argentic in Paris with the work of photographers Irving Penn, Brassaï, Boubat, etc.

Guided by his passion for water and light, he has shared his life since 2011 between New Zealand and France. In this new country he founded Piano on Tour, offering classical music for therapeutic and social purposes. Always exploring and curious about others, he also creates a timeless islet, Space Between, in the fabulous setting of Abel Tasman National Park where he welcomes travelers and artists from all over the world. During these encounters, he initiates, shares or even encourages creative projects, aware of the power that a favorable current can have in order to realize himself as a human being.