Janette Beckman – The Mash Up at Fahey/Klein Gallery 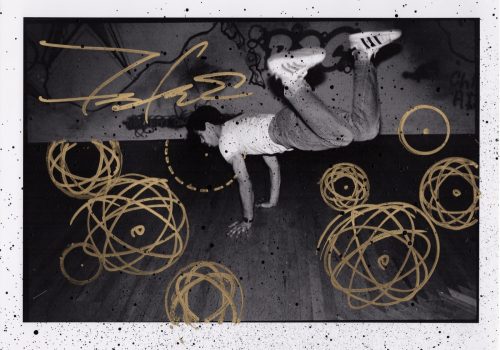 The Fahey/Klein Gallery presents The Mash Up, the inaugural exhibition of collaborative works by British photographer Janette Beckman and some of New York’s most important graffiti artists. This series combines Beckman’s iconic portraits of influential DJs and MCs, each individually painted, drawn on, and/or collaged by many of New York’s best-known graffiti artists including Crash, Futura, Lady Pink, Queen Andrea, Revolt & Zephyr.

The Mash Up series was originally conceived and curated by artist and former Def Jam Creative Director, Cey Adams. Adams selected and curated the participating artists, with Beckman allowing each artist to select a photo from her archive to recreate in their own distinct style, producing entirely new works of art in the process.

In addition to the new collaborative Mash Up works, our exhibition features a selection of historic photography produced by Beckman during London’s seminal punk rock era, and the birth of New York City’s hip hop culture.

Janette Beckman began her career at the dawn of punk rock working for publications such as The Face and Melody Maker. She shot bands from The Clash to Boy George as well as three Police album covers and documented the youth culture of the era. Moving to NYC in 1983, Beckman was drawn to the underground hip-hop scene where she photographed the pioneers of the culture such as RUN DMC, Slick Rick, Salt-N-Pepa, Grandmaster Flash, and Big Daddy Kane. Beckman continues to live and work in New York City today. Her dedication to documenting the outliers of society remains evident in the works she creates surrounding subjects such as Manhattan based dirt bike bandits, The Go Hard Boyz, an illegal girl fight club in Brownsville, New York, and the hard-nosed rodeo riders of the River City Rodeo in Omaha, Nebraska.

Janette Beckman’s work is in the permanent collections of the Smithsonian Museum, the Museum of the City of New York, and the Musée des Civilisations de l’Europe Beckman’s commercial work includes assignments for clients such as Dior, Kangol, Levi’s, Schott, and Shinola.

Released in conjunction with this exhibition, The Mash Up is also available as a lavish 220-page book, produced by Hat & Beard and Fahey/Klein Gallery and is available for purchase through the gallery for $45.