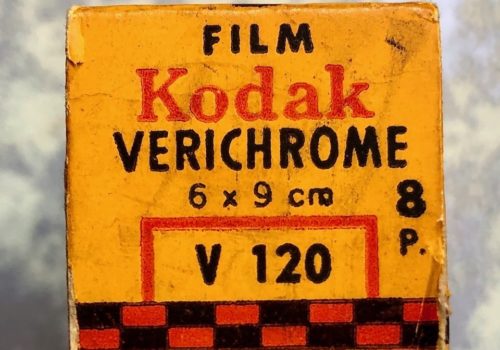 A passion for film magic

To mark this important date in his life, I suggested that he immortalize a highlight of this day on an old emulsion that I kept preciously, telling myself that perhaps I could use it one day, during a beautiful second-hand: a blank KODAK VERICHROME film of 125 ASA, an 8-frame film in 6X9 large axis (120) format made in France and which should have been developed before May 1953, yes judge rather it is this date, that is three years after the birth of my wife … 71 years ago.

To make this particular photographic adventure even more exclusive and even mysterious, I decided to develop this film in a Microphen Ilford developer that I had prepared and made three years ago already, but which I had taken care to keep preciously in a tightly corked dark brown glass bottle that I had stored in a cupboard well protected from light. But still, was it reasonable to think that there was a single frame on this very old, more than outdated film developed in an old developer?

Deep down I wished it very much and I wanted to believe it !. I was sure, silver magic would do its job!

Here are some images, with feelings I won’t hide from you, a little surreal it is true, but with these three images strong moments are present.

With a little hindsight, I imagine from its manufacture the life of this photographic emulsion, its 70 years lived rolled up on a small metal reel, protected by a waterproof paper, but still imprisoned in a small yellow cardboard box, waiting for the day or the box would open to finally emerge from the shadows and quickly get lodged in a device, to capture unique moments of life in a few tenths of a second, like this Sunday, August 1, 2021, birthday. The story of this film continues. Now, I hope he keeps those birthday moments for as long as possible.

Arles 2022 : Anne Clergue – Knight of the Order of Arts and Letters