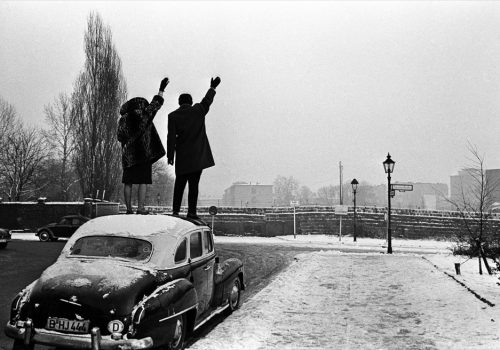 Léon Herschtritt passed away. Representative of the humanist movement in photography, Léon Herschtritt is famous for having been the youngest photographer to receive the Niepce Award in 1960, at the age of just 24. We devoted to him, among other things, this feature in December 2016.

Léon Herschtritt, A life for photography

With a passion for photography from an early age, Léon Herschtritt studied at the Ecole Nationale de la Photographie. Sent to Algeria to teach photography, Leon Herschtritt spent his days in idleness, but met Nicole, who became his wife, and photographed children in the streets of Algiers. With Les Gosses d’Algérie, his first series published in the magazine Réalités, he received in 1960 – at the age of 24 – the famous Prix Niépce from the Association Gens d’images. Back in Paris, he worked as a freelance photographer and became the Parisian correspondent for Camera Press Agency. He published his reportages and portraits of celebrities in magazines and joined the famous club of photography 30×40.

Through random friendships, meetings or assignments, the young Léon had breakfast with Jacques Prévert and his friends every Sunday, photographed Gainsbourg, Sartre or Jane Fonda, witnessed May 68 or documented prostitution. With a deeply humanistic approach, an innate sense of composition and a true ethic, Léon Herschtritt photographed France of the sixties. The world was changing, between the market of the Halles and the demonstrations against the war in Vietnam, between the mini-skirts and the Café de Flore, between the slums in La Courneuve and the Jardin du Luxembourg. In 1961, he went to Berlin to photograph the first Christmas with the Wall, a tragedy between illuminated Christmas trees and a snowman. In Africa, he went to document the end of the colonies for the photo library of the Ministry of Cooperation. In Paris, he took pictures in the streets and cafes, of children or celebrities…

At the beginning of the seventies, Léon and Nicole gave up the reportage and opened a cafe-restaurant which quickly became a meeting place for the photography community, with discussions, public slide shows, exhibitions… This bistrot, happily located near the auction house  Drouot, led them towards the collection of ancient photo equipment and old photographs. In 1993, pioneers of the photographic antiquity market, they opened a gallery at the flea market, then at the Paul Bert market and finally in Saint-Germain des Près, with their son Laurent.

Now retired, Léon Herschtritt came back to his treasure of negatives and contact sheets. Recently, thanks to exhibitions at the Rencontres d’Arles, at the BnF or at the Musée Nicéphore Niépce in Chalon-sur-Saône, we rediscovered his photographic work of a great sensibility, a gentle and straight glance in black and white on the sixties.

Léon Herschtritt, The end of an era