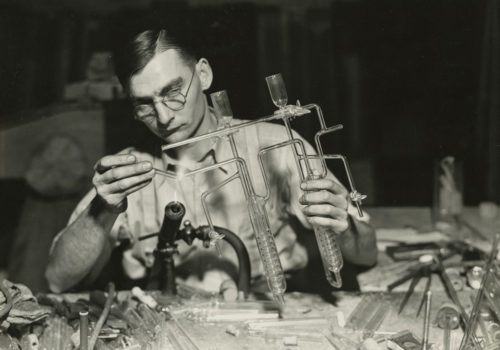 A tale of collective ingenuity and individual perseverance in the shadow of national crisis is the subject of Lewis Hine: The WPA National Research Project Photographs, 1936-37, on view at Howard Greenberg Gallery from April 15 through July 2. The Great Depression ravaged the United States in the 1930s, producing extreme levels of poverty and unemployment with a deep and penetrating social pessimism to match. Whereas some photographic endeavors of the time sought to document the misery and misfortune of those hardest hit by these conditions, Lewis Hine set out to photograph the opposite: the rebuilding of society taking place in the nation’s most technologically advanced sites of production, and the persistence and skill of the factory workers who made all of it a reality.

Established in 1935 as a division of the Works Progress Administration (WPA), the goal of the National Research Project (NRP) was to investigate new industrial technologies and their effects on employment. Lewis Hine was hired by the WPA to show the modernizing accomplishments of the nation’s factories in the years prior to WWII, particularly those being fitted for the most sophisticated forms of industrial production. Hine focused most specifically on the reorganized workplaces that were created by these modernizing efforts. It was during this time, for example, that women began entering the factory floor and joining the assembly line, and in the case of Hine’s photographs, were being called upon to help produce many of the country’s newest and most elaborate technologies.

As a pre-eminent pioneer of American photography, Hine was most prominently known for chronicling the unjust and oppressive social conditions of his day, work which helped lead to the passage of the National Child Labor Laws in 1938. Eager to depict these new facets of technology, Hine photographed factory workers in textiles, furniture, cabinet making, radio manufacturing, construction, and mining, among others, in New Hampshire, Massachusetts, New York, New Jersey, Pennsylvania, North Carolina, and West Virginia. Fueled by his belief that labor was the soul of America, Hines’s portraits depict the dignity and industriousness of the individual worker at a time when industry was so often documented as a national endeavor.

Lewis Hine: The WPA National Research Project Photographs, 1936-37 presents more than 70 images. It is the most comprehensive exhibition ever mounted of Hine’s NRP photographs. The exhibition was inspired by the research of photographic historian Judith Mara Gutman. She writes in her 2018 book Lewis Hine: When Innovation Was King (Steidl/Howard Greenberg Library) that “Hine produced a cross-section of American working life….[and] imbued his photographs with a singular importance that elevated them beyond the generally accepted role of photographs as illustration to text.”

More than 80 years later, the photographs from the New Deal programs, and of the NRP in particular, underscore photography’s capacity for capturing the resilience of the human spirit in the face of historically challenging conditions. The work that Hine produced is emblematic in this regard, showing as it does what a nation is capable of when individual potential is coordinated and harnessed for the collective good.