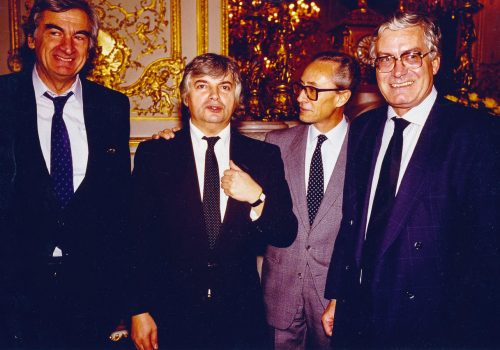 He left us early that morning.

Hubert Henrotte is no more. In this world, whose bubbling news, revolutions, climatic catastrophes and various facts he loved so much to follow, to always translate them into images thanks to the hard-hitting gaze of the excellent photographers who were his true family in heart and mind.

Michel Puech brilliantly recalled it *. Before being the president – founder of the biggest agencies of the 90s, Gamma first and then Sygma, the young photographer from Le Figaro was already inhabited by a constancy of life: to give the profession of photojournalist all its raison d’être, its dignity and its letters of nobility.

“HH” as he was called by his peer, could already have adopted this motto of Churchill: “We live from what we obtain, we build our life on what we give”

Because Hubert Henrotte gave himself body and soul to a passion that remained intact, to always have the impression of being an actor of his time until publishing in June 2019 his final work “Can photojournalism still save the press? “With the help of Floris de Bonneville, former editor-in-chief of Gamma. The wars of yesteryear are over! Jean Monteux who succeeded him at the head of the Gamma agency – still remembers their joint evenings from 9 p.m. in the deserted premises – only the two of them, at 4 rue Auguste Vacquerie, cutting  films – mounting the slides and overseeing the shipments.

In the image – to say the least – of the deep respect of Jean Monteux who only wanted to keep the good sides of the one who would become his direct competitor while privileging their pioneering complicity. Who is still amazed at the hidden sense of very cold humor that “HH” practiced.

Far from all the caricatures, that he sometimes deserved, the character of Hubert who had become “historical” took precedence over the truly generous personality of a professional world-renowned through the reputation of Sygma.

All the photographers point out: HH was always ready to give them all the means to go on a report by sharing the challenge of being the first on all possible “coups”!

In order to have the immense satisfaction of leafing each week through Paris Match, Time, Newsweek, Stern and other weeklies, the pages credited with the names of Gilles Caron, at the times of Gamma, then Henri Bureau, Jacques Pavlosky, Christian Simonpietri, Jacques Langevin, Patrick Robert, Alain Noguès, Keller or Dejean, Diego Golberg, Patrick Chauvel, Jean-Pierre Laffont and many others …

By involving his wife, Monique Kouznetzoff in charge of the prestigious “people” and Eliane Laffont in New York – his lifelong accomplice, who never allowed herself to be manipulated or led – their friendship having already been engraved in stone over time. , and always so exceptional in her American productions.

Competition was daily, even visceral, between agencies, in particular with Gamma and Sipa, and Hubert sometimes had difficulty concealing the pride in the exclusives achieved by “his” photographers. All recognize him the merit of having helped them in the yardstick of a brilliant career, as Alain Keler always stresses with emotion: “Without him, without Hubert I would never have been able to have my foot in the stirrup, to succeed in this profession ”.

“Unique in his kind, fundamentally honest was Henrotte,” says Raymond Depardon, recalling that ‘HH’ had in a way sacrificed his own career as a photographer to put his sense of photography, and organization at the service of the corporation. A generation of photojournalists needed to be organized, reassured, says the film director and photographer: “Henrotte did it”

The “boss” of Sygma was as much as the man, admittedly multifaceted, “closed and harsh in appearance but in truth fragile and tender” testifies Patrick Robert.

The smoke from his cigars was often the only protective screen, behind which Hubert Henrotte tended to hide, well before the hour, a real modesty, even an unexpected and surprising shyness.

And an exemplary sense of solidarity that still moves – when he started out with Gamma, Sebastiao Salgādo, tells of working “on pool” on October 14, 1977, after a world exclusivity with the King of the Belgians, and of being in the impossibility to transmit the slightest image – after having omitted to load his camera -, HH was the only one to understand it and excuse it, in the face of the impatience of the competing editors-in-chief.

Sitting in his office, as on the balcony of the world press, there was something of a true French Churchill about “HH”. In the relentlessness, stubbornness, with which he has always fought and struggled to defend both the existence and honor of a profession today in the turmoil of a widespread press crisis.

Let us imagine for a moment a virtual meeting between these two monster figures – once their cane is placed and cigar in hand – they would have served themselves a royal whiskey, to hear Wilson Churchill’s words: “The success is not final, the failure is not fatal, it is the courage to continue that counts ”.

In these memorable times, it is good to remember what a visionary he was, when agencies were created to give way to the sometimes sinuous but justified legend of the great man of the press that will remain Hubert Henrotte.