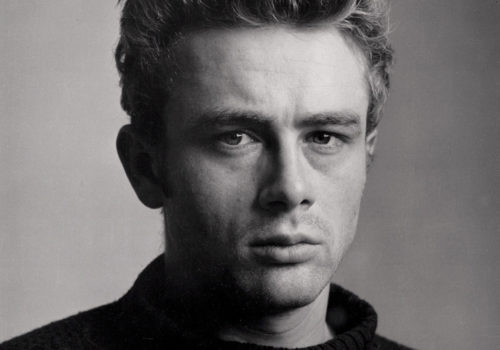 James Dean, whose persona shaped the archetype of the daredevil but vulnerable gallant for the post-war American male, was photographed by Roy Schatt for Life Magazine in 1954. The images from this assignment created an iconic series, titled The Torn Sweater series, that has become definitive in establishing the actor’s unforgettable image.

“The following group of photos is known as the Torn Sweater Series. The second shot has become perhaps the best-known picture of Dean. It was used as a backdrop for the stage revue, Grease, on six- and twelve sheets outside of theaters and sold as posters worldwide. I shot the series on December 29, 1954, at the request of Life Magazine. They never ran in Life, but it didn’t seem to affect their popularity.” – Roy Schatt.

In the 1950s, Roy Schatt was a photographer living in Greenwich Village, New York. A NYC native, Schatt studied painting with N.C. Wyeth in high school and later attended the Corcoran School of Art in Washington, DC. In the 1930s, he worked as an Art Director for Warner Bros, married Masha Arms, who became a pioneering photographer, and painted murals under FDR’s “New Deal” program. In the 1940s, Roy Schatt served in the US Army, where he functioned as a creative individual, creating posters, writing editorials, and developing events. Schatt eventually moved back to NYC and started working in an advertising company. He began to study acting and directing and became acquainted with the milieu of actors and producers of the world of theater, diving into the off-Broadway scene. Here, Schatt met theatrical director Jose Quintero and would photograph the cast of his productions. A strong portrait photographer, Schatt befriended creative personalities, and his pictures were soon to be used in publications and exhibited in the theater, where he would become the house photographer.

The Official Photographer for The Actor’s Studio

Eventually, Schatt was invited to a class at legendary acting coach Lee Strasberg’s Actor’s Studio, where he would attend several classes, photographing the noteworthy students. Impressed by Schatt’s photography, Strasberg named him the Official Photographer for The Actor’s Studio in the span of the 1950s and 60s. Roy Schatt would photograph many important actors, directors, playwrights, poets, and writers. His apartment (also his makeshift studio) would become a gathering place for the theater community, hosting the most famous celebrities such as Marilyn Monroe, Sidney Poitier, and Steve McQueen.

Schatt’s apartment was located in Greenwich Village, the epicenter of creative thought in the 1950s, teeming with creative energy. As an enclave of the avant-garde and the focal point of the Beat Generation, many famous personalities made their way through the Bohemian neighborhood. It was in 1954 that Schatt would meet James Dean before he became a star. Working in his apartment, Schatt explains how he unexpectedly met Dean through a mutual friend.

“I first met James Dean knowing absolutely nothing about him. Arlene Sax, a young actress friend, called up one winter day in 1954: “I met this wonderful genius – an acting genius! And I want you to meet him.” Photographing actors and actresses was a large part of my business, so I was naturally wary of yet another “genius.” “Please, Arlene, does it have to be today?” “Yes,” she said. “You see, we’re right around the corner….” I groaned. “I know you’re busy, but I promise, we won’t stay long, but you’ve… wait till you see his beautiful face!”

Schatt greeted Arlene Sax and James Dean at his apartment/studio. After Dean broke the ice from this initial meeting by performing a dance from a recent play, Schatt was amazed by the change of Dean’s chameleon-like transformation. After the meeting and perhaps mainly as a request of Dean, the two became friends, and Schatt agreed to teach Dean photography.

“What a shock. He slouched, was unkempt and squinty. After a moment, he reached for my offered hand, grunted in response to my welcome, and ambled to a seat at the far end of the couch. As he sat with his palms pressed between his knees, he seemed to shrivel.

I sat in my usual wing chair, Arlene near me on the couch. She was quite animated as she spoke of his talents: “God, he’s magnificent doing that dance in The Immortalist… You should see him use those scissors as….”

“Castanets! Like this,” Dean said as he jumped up and performed the dance. It transformed him. The small lump on the couch rose to become a thing of beauty. I couldn’t get over how his unpleasant, pinched face gave way to handsome radiance.” – Roy Schatt, James Dean, A Portrait.

A short-term yet potent friendship

After the serendipitous meeting between actor and photographer, from February 1954 to September of 1955, the two struck up a “teacher and student” relationship. Schatt documented Dean’s activities throughout the year while Dean shot his pictures under the photographer’s tutelage. The “Torn Sweater” series was a result of that short-term but potent friendship.

“I knew James Dean from February 1954 until he died in September 1955. I knew him as a friend and as a student. He was a disrupter of norms, a bender of rules, a disquieter of calm. ”

The day I shot the photos, the session went extraordinarily well. After a certain amount of horsing around, Jimmy behaved and became serious when I got the lighting set just right. He clicked, I clicked, and the photos clicked. He now had quite a bit of photographic experience himself, and after a while, I allowed him to direct some of the shots. It was all pretty heady. At one point, he commented, “Don’t you think I look like Michelangelo’s David?

An icon of teenage disillusionment and displacement

In the post-war period, the younger generations were expected to conform to the prevailing social norms. An icon of teenage disillusionment and displacement, James Dean, presented an Adonis-like, rebellious American youth, cementing his brand of rugged handsomeness and agitation with the leading role in a film aptly named ‘Rebel Without a Cause.’ Dean’s cultural influence as the chief rebel of the “Silent generation” disrupted American conservative attitudes of the 1950s. James Dean’s persona and conflictive psyche offered the first glimpse into what was to manifest in the 1960s. The disaffected, misunderstood, and non-conforming pathos of an ever-revolving incipient youth would make their indelible mark on the following decades.

The James Dean “Torn Sweater Series” has endured the test of great portrait photography. The images give a penetrating gaze that tries to reveal the complexity and the character of a man who perished in his youth and is still a great enigma.