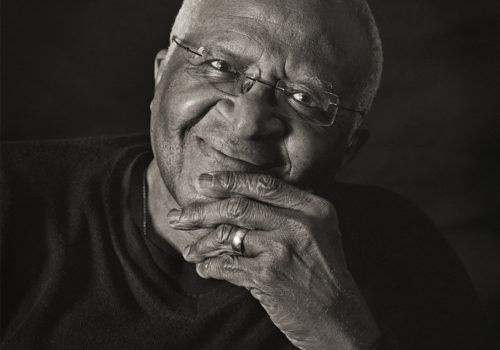 A portrait photographer can be fortunate enough to have special moments in their career when they have their camera in front of a truly inspiring subject. This was the case when Dana Gluckstein took portraits of Desmond Tutu in 2009. Dana Gluckstein’s pursuit of making portraits of indigenous people worldwide has led to her engagement in search of the commonalities of humanity and the respect for the local beliefs and traditions of separate cultures from throughout the world. Gluckstein’s photographic portraits (taken from 1983 – 2010) were published in a monograph called “Dignity” in conjunction with the 50th anniversary of Amnesty International.

30 Minutes With The Archbishop

“In the spring of 2009, I was photographing the San People in a remote area of Botswana for my book DIGNITY: In Honor of the Rights of Indigenous Peoples. It was a rugged, lonely, and disheartening journey, witnessing the tragic deterioration of these beautiful people, their culture, and their land due to diamond mining concessions. Without cell phone reception for days, as I returned to Johannesburg, my spirits lifted with a voicemail message: I had been granted a portrait session with Archbishop Desmond Tutu. I had first-hand knowledge of his work through volunteering with Artists for a New South Africa, a U.S. group that had worked to help end apartheid and rebuild in its aftermath. I flew to Cape Town.

It was the eve of the South African elections which fell amidst the Easter and Passover holidays. I would have thirty minutes with the Archbishop. I prepared a small studio with lights a black backdrop and loaded my Hasselblad camera with black and white film prior to his arrival. I also positioned a video camera to document this historic session. The Archbishop was warm, welcoming, and passionate as he spoke about this historic moment in South African history. He saw the end of apartheid and the election of Mandela as akin to reaching the Promised Land, yet, then the country, plagued by AIDS and a flawed leader, was forced to wander in the desert. He was brilliant and mesmerizing, and I treasured every word. He talked continuously, which made it challenging to capture an intimate, meaningful portrait. But I dared not interrupt him. Suddenly, we had only five minutes left. I took a deep breath. “Father, I’m so sorry, but could you please refrain from talking for the last few moments of our time together so we can create your beautiful portrait?”He burst out into one of his glorious, loving, all-embracing laughs, and together, we created these three images.”

Desmond Tutu commented: “The work of Dana Gluckstein helps us to truly see, not just appearances, but essences, to see as God sees us, not just the physical form, but also the luminous soul that shines through us.”

A Role Model To Millions

Archbishop Desmond Tutu was, and still is, a role model to millions of people throughout the world. He was the recipient of the Nobel Peace Prize in 1984. He was a champion of the freedoms and rights of all citizens of South Africa and spent his life trying to alleviate the suffering of others. He rose above setbacks and trials in his life to lead his county. In 1986 he became the Archbishop of Cape Town and in 2009 received the Presidential Medal of Freedom. With his recent passing, the world has lost a peacekeeper—an unsinkable spirit who saw the potential goodness of humanity. When we look at his portraits by Dana Gluckstein, we see grace, acceptance, and a countenance that has weathered time and experience and has not lost his joy in life.

Dana Gluckstein has photographed iconic figures including Nelson Mandela, Mikhail Gorbachev, and Muhammad Ali, as well as award-winning advertising campaigns for clients such as Apple and Toyota. Her portraits are held in the permanent collections of museums such as the Los Angeles County Museum of Art and the Santa Barbara Museum of Art. Her book, DIGNITY: In Honor of the Rights of Indigenous Peoples, and the associated international museum exhibition, DIGNITY: Tribes in Transition, have received international acclaim and awards.