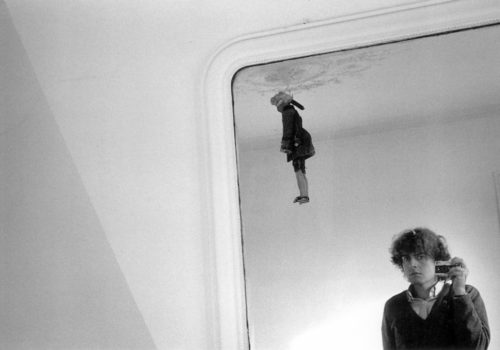 Hervé Guibert, the touching writer, photographer and brilliant photo critic—he began contributing to Le Monde in 1977—officially arrives in the United States this month with his first American exhibition. What better place than the Lower East Side, the cradle of subcultures and the 1980s gay scene to host these fifty photographs? In some ways, Guibert, nearly 20 years after his death, is coming home. Surely he would have wanted to be exhibited here in his lifetime, where few galleries are still to be found, since it remains working class and a hub of New York nightlife. His work is on display at Callicoon Fine Arts, unfamiliar to photo fans since the gallery is non-specialized, amid the cacophony of trendy bars and a few passages from Guibert’s Mausolée des amants, translated for the first time into English.

Echoing the poetry of the intimate, these photographs are imbued with a soft and soothing atmosphere unique to each of them. Sometimes materials are the focus, through Guibert’s personal belongings, and sometimes it’s his face or the faces of his loved ones, in several magnificent self-portraits. They all betray Guibert’s kindly presence, his delicate way of touching with the eyes, passionately showing the details of his life. There are as many men as there are women. But the former are often nude and observed from close up: torsos, hands, feet, an erect penis, universal fascination. Women, too, appear charming, like parisian galerist Agathe Gaillard, her small breasts bared, or Isabelle, reclining, wearing a stylish jacket, her hands bound, her eyes on fire.

A reference to classical painting, some of the pictures are actual icons, like one of a smoking body (“Sienne, 1979”) or those lying on a bed and chair (“Hans Georg et Thierry à Montecatini, 1983”). Others show a mastery of aesthetic blur, like “Autoportrait de date et lieu totalement oubliés, 1990,” whose style and captions are undeniably reminiscent of American photographer Duane Michals, about whom Guibert wrote extensively. It’s this photographic kiss dear to Michals and Guibert that sheds light on the exhibition, with pictures as veritable caresses of existence. The photographs are best observed while hearing passages from Guibert’s books, as in a film of texts and still images, frozen in time, the time of a personal story that would end in the tragedy of illness.