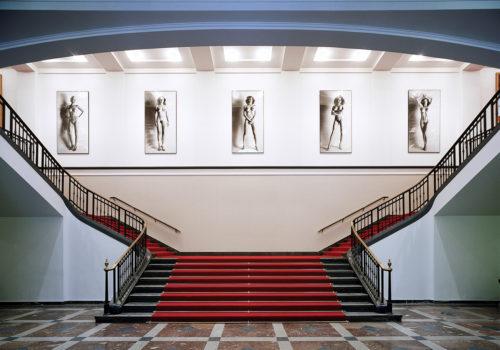 Helmut Newton’s wish was for a “lively building, not a dead museum.” He decided to establish an eponymous foundation in his native city of Berlin, in public-private partnership with the Prussian Cultural Heritage Foundation. In Fall 2003 this endeavor was sealed with a contract and a curator – 65 years after Newton boarded a train at Berlin’s Bahnhof Zoo railway station to flee the Nazis. Three years following his successful retrospective at the New National Gallery in Berlin in 2000, Helmut Newton was offered various buildings to house his foundation; his personal preference lay with the former military casino in Jebensstrasse located just next to Bahnhof Zoo. In just a few months, architects Petra and Paul Kahlfeldt converted a floor of the building, fashioning a museum-like space with a mixture of Prussian austerity and modern elegance.

Since 2004, the first floor of the historic building has showcased temporary exhibitions that change roughly every half year. On the ground floor of the museum, “Helmut Newton’s Private Property” has been on display since November 2004. Also designed by the Berlin-based architects Kahlfeldt, the permanent installation is a unique depiction of Helmut Newton as both a photographer and an individual. It includes filmic insights into the creation of Newton’s visual world made by his wife June, along with his cameras, accessories and fetish objects used as props by his models. Also on display is the famous “Newtonmobil,” a custom creation made for the automobile enthusiast, along with elements from his personal library and his apartment in Monte Carlo. His countless own publications and work since the 1950s for magazines such as Vogue, Elle, Vanity Fair, Paris Match and Stern, as well as some 100 exhibition posters from 1975 to the present, continue to document the development of his unparalleled work.

The Helmut Newton Foundation is dedicated to the preservation, examination and presentation of the photographic oeuvre of its founder as well as that of his wife June, who has created a significant own body of work since 1970 under the name Alice Springs. Other photographers have a forum here as well, according to the wishes of its benefactor. At the Helmut Newton Foundation, the provocative and iconic images of this great photographer enter into dialogue with the work of other prominent colleagues time and again. A lively place has thus indeed been created, keeping with the vision of its founder.