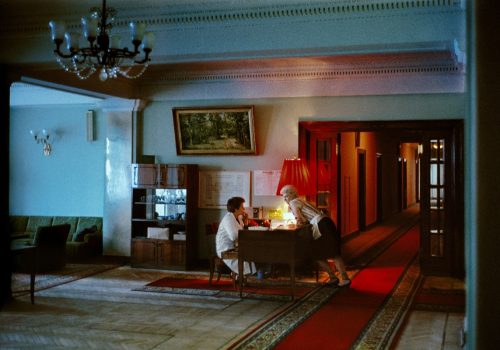 At a time when the world was politically divided into East and West, Magnum photographer Harry Gruyaert’s quest for light and sensuality led him to capture the colours of two very different worlds: the vibrant glitziness of Las Vegas and Los Angeles in 1981 and the austere restraint of Moscow in 1989, just before the fall of the Soviet Union. Harry Gruyaert: East / West, published by Thames & Hudson, is a remarkable journey of contrasts and contradictions now published in two stripped volumes. The book reproduces nearly a hundred photographs of these two series, of which seventy are new images.

Most photographers have their favourite light. They create it in studios or seek it out in familiar streets at preferred times of day. Very few have had Harry Gruyaert’s ability to make remarkable colour images in any light, with any colours, the world over. Beneath the low clouds of a grey-green Galway in Ireland. In the hot-orange sun of a Marrakesh morning. Against the cerulean sky of an Egyptian summer. In the steely storms of coastal Belgium. Gruyaert has returned from all these places with exceptional images. Then there is artificial light: the red neon pools of a cheap clothing store, the opalescent glow of a Parisian café, the blue-green strip-lighting of a public washroom. No colour or kind of illumination is alien to him. It all has beauty if you can see it, if you can catch it. What could be a greater colour contrast than the super-saturation of California – the “West”, and the drained palette of an exhausted Soviet Union – the “East”?

Born in Belgium in 1941 Harry Gruyaert studied photography and film and began making colour photographs in his adopted Paris in the early 1960s. By the end of the 1970s he had travelled widely and proved, at least to himself, that there really was no limit to what could be done with the simplest equipment: a 35mm camera and Kodachrome film. At that time, very little colour work of merit was being exhibited, and even less published. William Eggleston’s Guide has appeared in America in 1976, and the Italian Luigi Ghirri’s book Kodachrome in 1978. A certain momentum was gathering around artistically serious colour photography but it had yet to find its grounding. The handful of ambitious colorists in Europe and America were still working mainly in isolation.

There were benefits to this. Gruyaert did have his photographic heroes, notably Henri Cartier- Bresson Lee Friedlander, but they worked almost exclusively in black and white. Gruyaert took his color inspiration from painting from old Masters like Breughel and Goya, Matisse and Bonnard as well as American pop art artists like Nam Jun Paik and Robert Rauschenberg. The most sophisticated colour photography that one could see with any ease was at the cinema. Unencumbered by the poor technologies for printing colour imagery on paper, filmmakers had been able to push colour cinematography, technically and aesthetically, since its advent in the late 1930s. Nothing in print rivalled the beauty and communicative power of the best colour movies. Gruyaert’s favourite remains Michelangelo Antonioni’s first colour film, The Red Desert, released in 1964.

In 1981, he crossed the United States by car and discovered Las Vegas. He proposed to the short-lived Geo USA, the rival to National Geographic magazine, to do a piece on Vegas. Geo’s picture editor Alice George, liked the idea, and gave Gruyaert the assignment. It was like sending a kid into a candy store. He flew from Paris via New York to Los Angeles. There he explored the sprawling city with car and camera, before driving the 400km north-east to Vegas. Whatever the intentions of the commission, Gruyaert’s response was indirect. He would avoid the easy spectacle of the neon lights, the charm of night-time strip, and the seductive casinos. Rather, his would be daytime Las Vegas, revealed by the less contrived illumination of the sun.

All the familiar iconography is here. The automobiles, highways, gas stations, pools, motels and malls. Shopping centers alternates with lines rushing to the vanishing point of some an unspecified future. Although Gruyaert did photograph groups of people in these settings, the dominant impression is of lone figures, dwarfed by the scale of the architecture, scuttling from one place to another, their purpose a mystery. Observational photographers often are lone figures themselves, never quite sure of their aims, hoping something will happen. Through a kind of empathy, they will photograph people in similarly existential or marginal situations. But to be drawn to do this in a town so explicitly dedicated to the pursuit of enjoyment is an act, conscious or not, of distance. Wariness, even.

Beyond the visual attraction, there is an unmistakable feeling of melancholy here, as there is in much of Gruyaert’s photography. And a sense of disappointment too. There is some kind of elegy, to a promise lost or squandered for the day’s distraction. A beautiful photograph of loneliness or alienation can be redemptive but it never takes away the pain, and never overcomes the social realities. For all the delight that Gruyaert’s photographs offer us, for all the colourful joy, these are bittersweet depictions. Unsurprisingly, Geo never published this take on Las Vegas. Over the years just a handful of these images were seen in books and exhibitions. Only now has the full extent of Gruyaert’s work been revisited and looked at afresh.

In 1989, he was one of several photographers to accept an invitation to photograph in Moscow. It was to be an exchange, with Soviet photographers coming to make work in France. He travelled with his friend and fellow Magnum photographer Josef Koudelka and a new member of Magnum Photos the Russian Georguy Pinkhassov   . It was Gruyaert’s first visit behind the Iron Curtain, and Koudelka’s first since leaving Czechoslovakia in 1968. The loose project began in late April, stretching over the “May Day” festivities. Gruyaert worked in his customary way, trusting his eyes, alert to the shifts in colour and atmosphere.

Things were moving fast in the USSR, and when history suddenly speeds up, the outcome is uncertain. The old order was crumbling, hastened by the reforms of President Mikhail Gorbachev. On May 25, the democratically elected Congress of People’s Deputies met for the first time, signalling an end to the rubber-stamped power of Soviet rule. (In retrospect, it was a very brief flowering, before the country was pillaged and brutalized yet again by the greed of the emerging oligarchs and the collapse of the remaining social institutions). By then Gruyaert was gone. After ten days of rich and rewarding observation, and around a hundred rolls of his trusted Kodachrome, he returned to Paris as scheduled.

It is striking that these Moscow photographs are more populated than those Gruyaert made in America. Indeed, the shots of informal groups on those Soviet streets are some of the most complex and compelling he has made in his long career. In the chaos of a market scene, he snatches a composition possessed of such otherworldly poise that one wonders exactly what he was looking at in those brief moments when his eye was to the viewfinder. The instant is fixed forever as a picture, and it will take you that long to ponder just how it came to be.

To compound this technical delay, Harry Gruyaert’s work from the 1970s and 80s was ahead of its time, and it has taken audiences a while to appreciate the extent of his artistic achievement. East/West represents only a very small fraction of his remarkable oeuvre. There is still much to be discovered among the many thousands of exposures he has made. Like the other color masters of his generation who are still working (William Eggleston, Stephen Shore, Guido Guidi, Joel Sternfeld and others) Gruyaert finds himself regarded as both a contemporary photographer and a figure from the medium’s rich and neglected recent past. But if we respond to an image, we respond to it now, no matter when it was taken. There is no time travel. All good photographs are, in a profound way, contemporary.

David Campany is a photography writer. His essays have appeared in numerous books, and he is a regular contributor to Aperture and Frieze. Campany’s traveling curatorial project a Handful of Dust was published in 2015 and exhibited at Le Bal, Paris, and the Whitechapel Gallery, London, 2017.