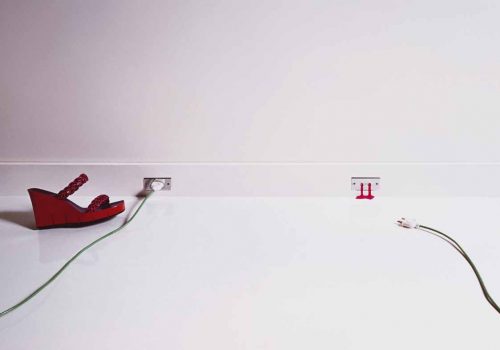 Guy Bourdin revolutionized fashion photography in the late 20th century, as did Helmut Newton. Both were the star photographers of Vogue Paris and produced some iconic images of that era working for the major international fashion houses. While their medium was the magazine, they approached it with avant-garde point of view and sharp humor. Unique as they were, they both broke aesthetic conventions achieving a sense of timeless glamour in their editorials and advertising photography and independently from one another developed a sense of “radical chic.”

In 1970s at the peak of their career while they photographed for magazine editorials, Newton shot the collections of clients such as Chanel, Yves Saint Laurent, Thierry Mugler, Mario Valentino and Blumarine. Simultaneously, Bourdin photographed collections such as Versace, Ungaro, Chloe, Chanel and Yves Saint Laurent while in addition he found a prime client in Charles Jourdan – the French shoe brand – that lasted over 15 years.

Now, The Helmut Newton Foundation, In Berlin, presents in a new exhibition,the iconic works of these two influential fashion photographers to pay tribute to their visionary artistic contribution and their enduring legacy.

Newton called himself in self-irony “A Gun for Hire,” a term then used for the title of the exhibition of his commissioned work shown posthumously in 2005 in Monaco and Berlin and later in Budapest. A selection of this project is now shown again at the Helmut Newton Foundation – for the first time juxtaposed with the works of his notable French colleague, Guy Bourdin. In Helmut Newton’s A Gun for Hire one can see commissions for fashion designers from the 1990s that were first published in their own fashion books, and later often shown by the photographer as part of his own oeuvre. It was never merely a fashion shoot which he produced, but also an unexpected, complex story, tinged with the suspense of an Alfred Hitchcock film – without forsaking the autonomy of the image.

Entitled Image Maker, Bourdin’s exhibition introduces his works from various publications, iconic and lesser- known images, Vintage prints, Vogue Paris layouts alongside his visionary advertising for Charles Jourdan shoes. Both formally and contextually Bourdin presented shoes and other fashion products in challenging ways, by mainly using it as double spreads that resound today as modern beyond their commercial context.

Small and intimate, another adjacent room – “June’s Room” – is reserved for friends and colleagues of the Newtons – and this time for Helmut Newton’s former assistant Angelo Marino, who has gone on to work with Newton’s widow June (a.k.a. Alice Springs). Complementing the works of Bourdin and Newton, Marino presents under the title Another Story an eclectic view of his immediate environment, which he photographed on the way from his home in Cannes to his workplace in Monte Carlo. The snapshot-like images, taken with his iPhone, capture fellow travelers, the sea, or views of architecture and the landscape rushing past the window of the train.