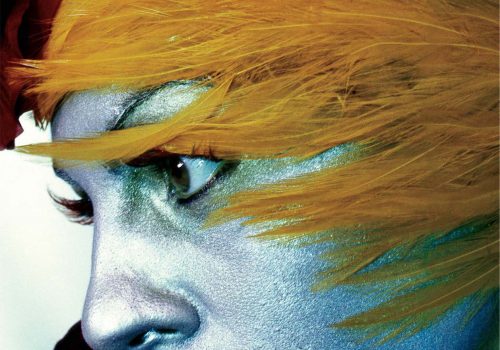 Idols is an ode to eccentricity as had been imagined and than coveted by the world of the eyes that generated a disconcerting creativity in a town where exception is the rule, New York City. After focusing his lenses on the famous such as John Lennon, or Salvador Dali ,Gilles Larrain turned in 1971 on the tranies, gender bender and drag queen then contemptible and oppressed, a crowd since then they were set aside from the people for being non conformists and bold in their way of dressing promoting the social virtuousness of fantasy and show.

It is as victims of a majority incapable of seeing the essential emancipation that the photographer welcomed the beautiful freaks in his studio in Soho , during more than a year. There in a benevolent way he made them pose, play, express their emotions in all their splendor. In their gaily colored outfits with extravagant make up, glittering sequins, or animal masks that was indispensable some of them become movie stars or icons of fashion. Furs and laces charm us while chains, pearls and mirrors strengthen the movement of the imprisoned image looking for tolerance. The textures are set ablaze with the enriched saturation of the colors and when the creatures of a day or for life take off their costumes it is to offer a naked body covered with silver or flaming gold. Whose posture has no sex and play with the imagination. In the midst of this procession exploring styles and periods, others partisans of this new freedom offer simply their faces as documents a photo test guarantor of dignity and awakening spirit.

This is just what attracted Ryan McGinly more contemporary artist than Larrain. In 1998 strolling in the loft of his friend Jack Wall , a place marked by the bohemia of the 20s, the young photographer found Idols and literally drowned in it .

In homage to this inspiring work, he writes in the foreword of the reedition “ this book carried for me the history of New York and of a subculture that opened my curiosity. My elder brother often
cross dressed and died of aids 4 years before I discovered Idols. These pictures brought back souvenirs of him and his friends.. These people were real outsiders, they were not Warhol super stars that one saw everywhere. Idols is a book I often look at “.

McGinley latter on learned as did many , that those pictures were fed by the association of natural and sophistication. For one must say that the relationship between the seeing artist and the artist in representation is not a game . Idols is made of pictures whose anthropological qualities are undeniable.

And if one should retain any wisdom in those images we would chose their capacities to create a breach in the unbending ordinary judgement.