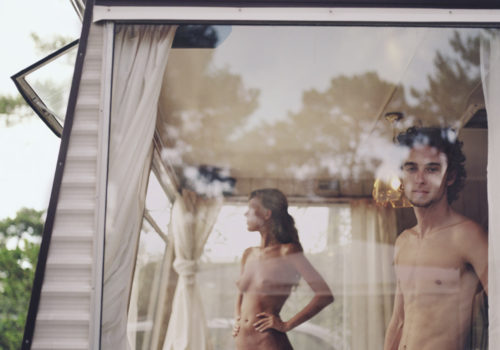 Galerie XII Paris presents Mona Kuhn : Selected Works, a retrospective exhibition celebrating the career of the Brazilian-German artist and which coincides with her first monograph “Works” published by Thames and Hudson in 2021.

Recognized for her contemporary and intimate representations of the nude, Mona Kuhn is considered a leading artist in the world of figurative discourse. For this exhibition, Galerie XII Paris and Mona Kuhn have selected a range of works produced in various places: from Arcachon to the suffocating tropical forest of her country of origin (Brazil), and to the great expanses of the Mojave desert in the United States.

The exhibition highlights the magical qualities that characterize Mona Kuhn’s photography; a mixture of romance, beauty, grace and innocence. The general feeling of intimacy is the result of the deep and lasting relationships that the artist develops with her models.

The works on display cover Mona Kuhn’s seminal period from the early 2000s to the present day, from classical notes to the latest experiments playing with abstraction, as the artist continues to question the role of representation in photography.

A word from the gallery owner – Valérie-Anne Giscard d´Estaing

“We have been talking about an exhibition for Mona Kuhn in Paris for eighteen months and I am happy that we can finally present it in Paris. Along with the publication of the magnificent book produced by Thames & Hudson, we show footage spanning her career. After this very strange year where most of us have gone through difficult times, the works of Mona Kuhn bring us a moment of balance, a feeling of freedom and joy to contemplate the beauty for which I cannot thank her enough.”

Mona Kuhn was born in Sao Paulo (Brazil) to German parents. In 1989 she moved to the United States and continued her studies at The Ohio State University and then at the San Francisco Art Institute. She is currently an independent researcher at the Getty Research Institute.

Her previous series-based monographs include Mona Kuhn: Photographs, Bordeaux Series, Native, Private, Evidence, She Disappeared into Complete Silence (all by Steidl), Bushes and Succulents (by Stanley / Barker) and Study (by TBW books). Works (Thames & Hudson, 2021) covers all of her work to date.

Mona Kuhn discovered the power of photography as a young girl in Brazil after receiving a Kodak Pocket Instamatic camera for her 12th birthday. She was drawn to figurative work, especially painters using figurative photography to explore fascinating subjects, and it didn’t take long for her to embark on her first study of the human form. She is renowned for developing close relationships with her subjects, resulting in images of remarkable intimacy, reinterpreting the nude in the canon of contemporary art.

“I am constantly in awe of our existence. It is a fundamental notion, but sometimes overwhelming. And I get a lot of energy from that notion. I like to tap into this energy by creating new series and expanding my understanding of ourselves and our creativity. I like to think of our bodies as vessels to a global unconscious that communicates back and forth. My job is to keep this channel of communication open. I have been working on the same subject for years and will continue to do so.” – Mona Kuhn