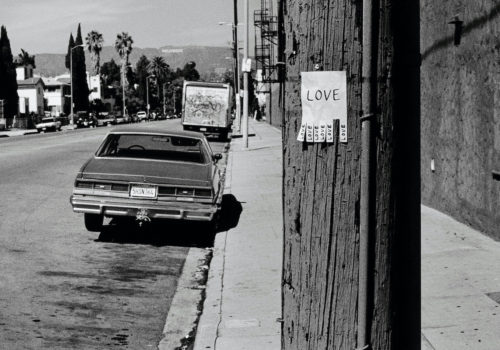 When we can no longer go to America, it is America that comes to us! The exhibition “Dear America” which presents, for the first time at the Galerie Thiery Bigaignon, the works of Rémi Noël, offers us a tender, poetic and truculent vision of America. And it couldn’t have come at a better time!

Rémi didn’t start photography at the age of 6 with his grandfather’s Rolleiflex, even tough he only uses traditional film cameras. He was in fact 30 when he set his desire for images free and produced a few still lifes at his place, in Paris. But it wasn’t long until he decided to leave his Parisian studio for the American far West.

From this very first American journey, he fine-tuned a unique creation process: all year round he conceives his images, sketches them, then, for about ten days, he heads West, cradle of the American civilization, that had become his infinite source of inspiration. There, he revisits the archetypes of the American myth: the motels with their illuminated signs, the deserts and the highways that cut through them. This is where he determinedly searches for the ideal setting for his productions.

With his background in advertising, Rémi Noël likes to be concise. He prefers short stories to novellas, and in cinema, short films are his favorites. As a photographer, he strives to tell short stories too, stories captured at a glance. The message is always very clear, the humour never far away and the poetry well anchored. With a solid culture of photography and literature, he plays with words and images, and so doing, frequently dialogues with his masters (Kerouac, Hopper, Courbet and Fontana, to name a few). His photographs, carry a deep sense of freedom – that same freedom sought after by most travelers -, brilliantly mingles imagination with reality.

With an acute sense of scenery, the stories he tells are full of poetry and humour. His work has the remarkable ability to catch the attention at the very first glimpse , his visual haikus make the visitors smile, his images caress their soul.

The exhibition “Dear America” presents a collection of 27 photographs made in the United States over the last 25 years, from 1994 to 2019.

Rémi Noël was born in 1963 in Paris. After studying communications, he became an advertising copywriter and then creative director. At the same time, he published books of his photographs: « Natures mortes, mais pas trop » (2001), « Vaguement poétique » (2003) published by Eden/Janvier; « United States of Rémi Noël » (2008) and « Adventures in Microwave Cooking and Other Stories » (2011). In 2013, he founded Poetry Wanted, a publishing house specialized in photography. He lives and works in Paris… between two American trips!