Galerie Thierry Bigaignon : Irène Jonas : The suitcase in the closet 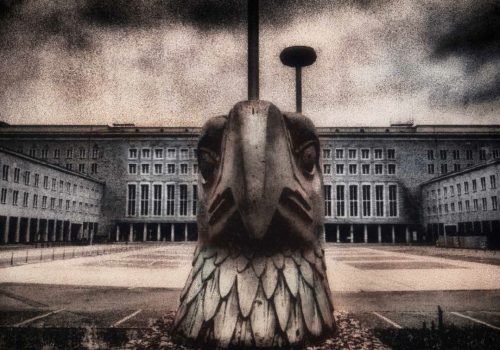 Faithful to its policy of openness, the Galerie Thierry Bigaignon welcomes an unrepresented artist each year in order to highlight a particularly interesting and accomplished work. After the Japanese artist Hideyuki Ishibashi and his series “Présage” in 2019, the Parisian gallery has set its sights this year on the series “The suitcase in the closet” by Irène Jonas, a real favorite.

In this photographic quest carried out between 2018 and 2020, Irène Jonas takes us to places marked by history: Munich, Dachau, Prora, Nüremberg, Prague, Terezin, La Lair du Loup, etc. Starting from a black and white print that she enhances with oil painting, Irène Jonas accentuates the absence of landmarks between past and present, the confusion between dream and reality to merge intimate memory and historical memory.

Sociologist and photographer, Irène Jonas integrates image into much of her research. Her sociological work on  family photos leads her to question the intersection between personal memory and history. Irène Jonas explains: “These photographs are stories that I tell myself, stories born at the crossroads of an intimate memory and a collective memory. They are the result of an inherited memory and an imaginary reconstruction, they do not tell the story of Nazism but approach an emotional awareness of what Nazism could have been “.

From these places marked by the Shoah, these places which symbolize this historical period that the artist did not live directly but  which seeped through the words, and then later through documentaries and books, Irène Jonas wanted to recreate a here and now seen through the filter of a childlike imagination marked by the past. Photographed like a period film, directing her lens and framing to exclude anything that did not relate to the photographer visual idea of ​​this bygone era, each character is brought to play an independent role of the reality in which they had been seized.

A favorite series for Thierry Bigaignon who says: “When Olivier Bourgoin, from the révélateur agency, came to the gallery to present this work to me, I was immediately won over. This is a particularly deep series and it is produced with a remarkable delicacy “. And to add “Halfway between photography and painting, between imaginary narration and historical reality, between darkness and light, Irene takes us into a very special atmosphere that leaves marks when we leave the gallery”.

A member of the révélateur  agency since 2016, Irène Jonas pursues a dual approach, one in black and white, the other more visual art in painted photographs. In 2018, she won the first FotoMasterclass prize and exhibited at Fotofever. In 2019, she exhibited at the Rennes Opera House on the theme of the Phantom Vessel and produced a projection of 80 photos on a musical piece by Jean Cras. Her book “Dormir, dit-elle” was published by Arnaud Bizalion and “Crépuscules”, from which the series “The suitcase in the closet” was taken by Editions de Juillet.

Irène Jonas : The suitcase in the closet