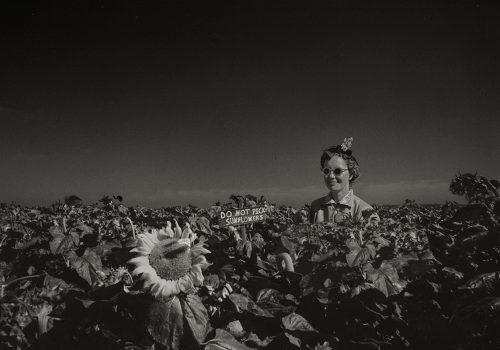 In the series To Discover America, Tali Amitai-Tabib draws on the archives of the history of American photography, paying particular attention to the representation of women in the photographs. The artist has extensively studied photographers from the 1930s to the 1950s such as Dorothea Lange, Arthur Rothstein, Ben Shahn and Jack Delano. Four years of work were necessary to achieve this set in which Tali Amitai-Tabib questions, from a strictly feminine point of view, the notion of conquering new territories, as a metaphor for an inner journey.

She keeps a large place for subjectivity and comments: “I want to tell a story, I am not obliged to tell the truth”. The artist starts from a story or a contemporary event and presents her own vision through the technique of photographic montage.

To Discover America focuses primarily on women from the 1930s to the 1950s that the artist incorporates into often deserted and sometimes dark landscape. The mood of the image carries some concern; they appear alone, and seem to have to face the many dangers of the world.

Trudl Böhm-Williams was a young German of Jewish faith who found refuge in Britain in 1939.

For over six decades she took photographs of the places where she lived, worked and spent her vacations. She always attached a photo or two that she had taken to the letters she wrote to her family scattered around the world. These photographs were collected, scanned and reprinted by her relative, Tali Amitai-Tabib.

Trudl Böhm-Williams has always dreamed of being a photographer. However caught up in her struggle for survival for most of her life, she was never able to achieve her dream. Tali Amitai-Tabib went to Great Britain to try to retrace Trudl’s life course. She traveled to the places where she had lived, worked and vacationed. She listened to people who knew her talk about her.

With a small digital camera, she photographed what Trudl could have seen with her  eyes. Using these photographs and digital editing software, she recreated the world of a woman she had never met and in this way tried to fulfill her dream.

Tali Amitai-Tabib is an artist photographer well-known in Israel.

She has participated in numerous solo and group exhibitions in galleries and museums in Israel and abroad.

In 2011 the artist saw a solo exhibition at the Tel Aviv Museum of the Arts, and the publication of a book by publisher Am-Oved.

Trudl is her first digital work. Tali Amitai-Tabib usually processes her films on her own.