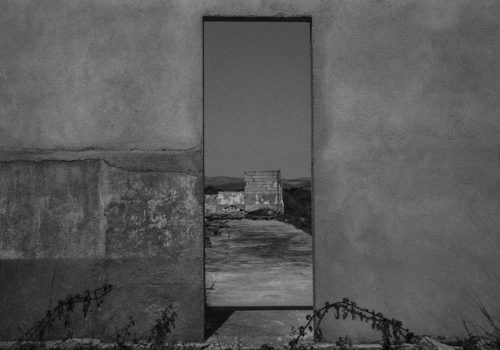 If the starting point is indeed a questioning of the way in which the Mediterranean has, at all times, been a space of migration, this is not a question here of the umpteenth “report” or “documentary” on the dramatic topicality of this situation which crosses the news.

Théo Combes has decided, between Port-Bou and Menton, to take a trip that is an open questioning, a search for signs, a way to meet others, to indulge in surprises, to take advantage of a burst of light, to question spaces.

His journey is not that of a migrant but that of an attentive observer who seeks to perceive – perhaps even to understand – how the territory has been marked by history, how it left clues here and there and how today, men and women cross it and inhabit it. Path, sea, architecture, skies, characters, no hierarchy between genres or situations, just notes, feelings, memories of particular moments.

The choice of black and white, an instinctive writing – with firm framing – and a grain that makes the grays vibrate and makes us share the emotions.

A photograph which does not seek to demonstrate or prove but which, sensitive, is in constant questioning.

He works regularly for the press, mainly for the daily Liberation, and produces reproductions of works of art for the Galerie Yves Forrie in Sète.

In 2019 he won the Laurent Troude scholarship for his project – started in 2017 that is still ongoing – around the Mediterranean and the historical and current issues of immigration. It is this work, which could not be exhibited in 2020 at the ImageSingulières festival, which is presented in the Château d’Eau.

Théo Combes is one of six young photographers commissioned by the Association CétAvoir as part of the “France as seen from Occitanie” project.