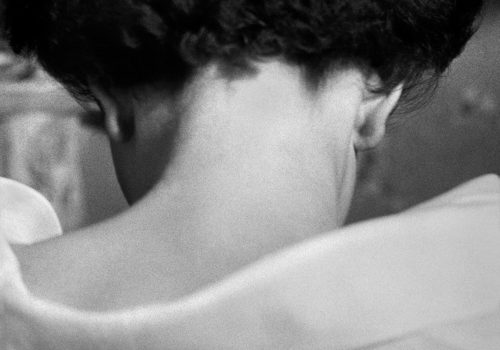 René Groebli, born in 1927 in Zurich,was part of a generation of Swiss photographers who, after the Second World War, marked the history of 20th century photography. Student of Hans Finsler in the famous class of photography of the Zurich art school where Robert Franck, Werner Bischof and René Burri also studied  he freed himself from the research neglected by the new objectivity of the 1920s.

The young author stands out by creating images that give as much importance to emotion as to information. Dissident Photographer of all professional classifications, René Groebli gave up  photo-reportage at the age of 26 and stands out for his personal creation in perpetual motion.

The photographer made a name for himself in 1949, with the series “La Magie du Rail”, a black and white railway adventure. Placed in the locomotive, it records with masterful poetry the mechanical odyssey of the steam engine; what he created at the age of 24 is a cinematic narrative that imposes the rhythm of another era, movement takes time, the landscape goes by to the rhythm of the crossties and stone tunnels that line the route of the train. In these images, are the hiss and the noise, we feel the steam, the smoke, the heat, the whole soul of train travel.

This just and poetic look, René Groebli exalted it, in 1953, in “The Eye of Love”. Through his photographs, he translated his sensual and loving feelings as a newlywed during the honeymoon with his wife Rita. It is probably one of the most beautiful declarations of love in the history of photography, created almost twenty years before “Sentimental Journey” by Nobuyoshi Araki. This very beautiful series is also to be discovered in the exhibition “Love Songs“ at the MEP from March 30, 2022.

As early as the 1960s, René Groebli was one of the pioneers in the use color and dye-transfer. Whether in commissioned work for industry or personal work, his experiments around color image development are impressive. René Groebli is a pioneer in creativity and technicality. He has an international reputation in creating new advertising photography.

Until the 1980s, he continued to develop his unique look that was radically modern.

The Perspectives exhibition looks back on the masterpieces of the artist’s major series. It presents a set of more than fifty platinum-palladium prints and silver prints from the eras.