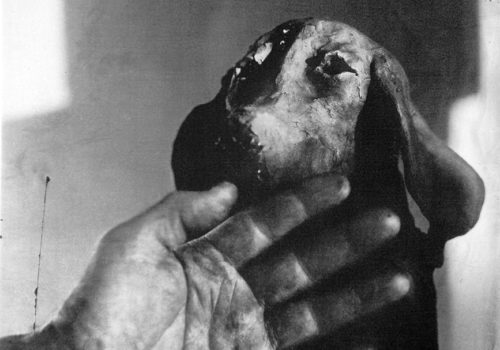 “Un architecte comme les autres “ (“An architect like the others”) is the first personal exhibition by Laurent Millet at Galerie Binome. The artist presents two new series in which he also reveals for the first time his practice with bichromate gum. Hybrid, his photographic works take root in space through other mediums, such as sculpture, drawing, or in situ installation. The making of the image, and by extension of the imaginary, is at the heart of his art research. Straddling narration and more formal characters linked to architecture, he also questions the place of the artist in the creative process.

The search for a shelter in which to project oneself is at the basis of Laurent Millet’s work. He explains the original  series Petites machines littorales (1997) and number of subsequent works. Among the latter, some take the cabin as a model, others turn to architecture and its history.

This is the case with the three series brought together in this exhibition where we can discern references to architectural modernism, to its  basic volumes and their stacking, but also to characteristics specific of some of its architects. Structures of transparent planes dialoguing with plants, the cyanotypes of Schloss im Wald zu Bauen (2012) thus echo the glass architecture of Mies van der Rohe which, after the war, found its culmination in the Farnsworth House in Plano, a pavilion in a natural environment. Perhaps more indirect evocation, the prisms of gelatin sheets in the primary colors of the Children’s Corner (2014) series seem to refer to the dreamed or constructed homes of neo-plasticists Theo Van Doesburg and Gerrit Rietveld. Finally, the cardboard constructions of An Architect like the Others (2020) would be even less specific if the clay face of Le Corbusier did not appear on several occasions.

Summoning these references is not, for Laurent Millet, worth a comment. In the series on Le Corbusier, the presence of the dog does not mean to equate the “machine for living” with a niche or, to use the critics of the Radiant City and spin the animal metaphor, a “giant hutch for guinea pig tenants”. The figure of the dog is the result of a coincidence that started the series: like the schnauzer of which Le Corbusier was so keen to bind two volumes of Don Quixote with his skin, Laurent Millet’s basset hound is called Pinceau.

This playful relationship with references is just as evident in the treatment he gives them. They take the form of precarious, poor and imperfect models which also evoke construction games for children, some of which, like the polychrome glass blocks of Bruno Taut’s Dandanah or the painted wood pieces of Alma Siedhoff-Buscher, were designed by architects and designers of the period. With Laurent Millet, modernist architecture becomes domestic, even vernacular.

However, this appropriation is not limited to forms. It is also a matter of identification. The series An architect like the others does not, in fact, have the systematism of the two others which decline these arrangements from image to image. Alternating black and white and color, photographs of sculptures and staging, it takes on the appearance of a small theater of the absurd with sets as elementary as the models in which the artist makes furtive appearances and leaves traces of his reading. The sketches are beyond comprehension, but the series makes the artist an architect like the others whose desire to build he shares.

However, it will be understood, it would be less for Laurent Millet to project, like the early Corbu, a “contemporary city of three million inhabitants” than to tinker and build a shed on the sea coast like the one at the end of his life.

Its name could be Le Refuge

Born in 1968 in Roanne, Laurent Millet lives and works in La Rochelle. He also teaches at the Angers School of Art and Design (TALM). Nadar Prize 2014 for The Enfantillages Pittoresques (Filigranes Editions), Prix Niépce 2015, member of the Casa de Velazquez (2007 to 2009), among other awards, his work has been the subject of numerous publications and exhibitions – Musée de la Chasse et de la Nature, BnF , European House of Photography, Natural History Museum, Rencontres d’Arles, Niépce Museum of Chalon sur Saône, Rouen Photographic Center … – including a first retrospective at the Angers Museum of Fine Arts in 2014, and a second scheduled for 2021 at the Malraux Museum in Le Havre. His works are present in prestigious collections in France (BnF, FNAC, Mep …) and in the United States (Los Angeles County Museum, MoMA in San Francisco, Chicago Art Institute, Museums of Fine Arts in Houston and Santa Fe…) where he is also represented by the Catherine Edelman Gallery in Chicago.

He joined Galerie Binome in 2019 which is organizing his first personal exhibition, Un architecte comme les autres in 2020 (November 10 – December 19).

Hybrid, Laurent Millet’s photographic works take root in space through other mediums, such as sculpture, drawing, or in situ installation. Timeless , they explore a multitude of printing techniques, ambrotype, salted paper, cyanotype, gelatin silver and very recently bichromate gum. The making of the image, and by extension of the imaginary, is at the heart of his art research. Straddling narration and more formal characters linked to architecture, he also questions the artist’s place in the creation process.