From Ukraine. The first story: Archives by Alexander Glyadyelov 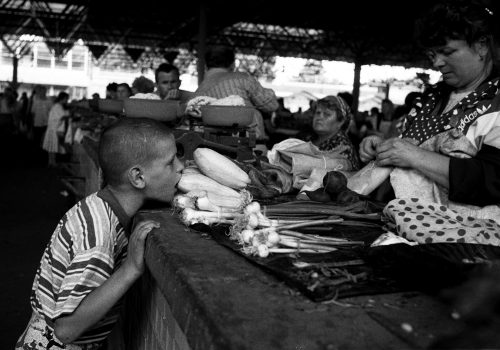 Her name: Anna Akage. She is Ukrainian, a journalist and passionate about photography.

Every month, she will hold her column in The Eye on the history or news of photography in Ukraine.

Here is her first chronicle.

Ukraine might not be the best place to look for solutions and answers: centered in the vortex of military, political and social travails, it yet had no time to analyze, it’s occupied surviving. But even if the time for changes is not the best to live in, it is the best to study. With this article, we start a series of publications about the most remarkable Ukrainian photographers, who document life in their own country but contribute to an ecumenical visual archive.

Just recently a Berlin gallery Alles Mögliche presented a solo exhibition (open till November 15th) of internationally acclaimed Ukrainian documentary photographer Alexander Glyadyelov “Life, Death, Love, and Other Inevitable Circumstances.” On show – a selection of his photographs from the projects, done over the course of his career, shot at the streets, hospitals, battlefields, and prisons in his home country and abroad since the mid-90s till today. This exhibition is one of his more than 40 solo shows held all around Europe, in USA and Africa. For his solemn work, Gladyelov received Hasselblad Prize at the European Photography contest in Vevey in 1998 and Mother-Jones Medal of Excellence in 2001, among many other awards.

Alexander Glyadyelov was born in 1956 in the family of a Soviet officer and since his childhood is accustomed to traveling. He started photographing during alpinist expeditions with friends and after made had a short run working as a photojournalistic  in a Soviet newspaper, but  neither deadlines, nor short time to produce stories appealed to him.

Glyadyelov is a self-educated photographer. In USSR photography was not a form of art, but a technical specialization, actual education was pursued in the sparse photographic communities. One of those, a Kiev-based Poglyad (The View – eng.) appeared to be close in values and in views to Glyadyelov. And soon he became friend with a group of photographers, who later became staff photographers in various international agencies. But Glyadyelov turned away from assigned work: “At that time we called that social photography, not photojournalism. Because nobody worked for the media, yet we had a strong desire to change the photography from how it was presented in the Soviet press. It was unbearable to see.”

The photographer recalls the time when Soviet photography ended and Ukrainian photography didn’t really start. “There was a strong school in Kharkov (Kharkov school of photography was a community of photographers, Boris Mikhailov – among them, that represent modern photography in USSR and so far remains the strongest photographic school in Ukraine both during and after Soviet times ) and Dnepropetrovsk (now Dnipro city). Stuff photographers from Soviet agencies and newspapers did a great coverage of the Chernobyl catastrophe and after-liquidation. Among them: Igor Kostin who (died 3 years ago in the car crash) and Viktor Marushchenko ( who established a photo-school in Kiev and is a co-founder of 5.6 Magazine). The outstanding photographers of that time: Vyacheslav Tarnovetsky, Vladimir Filonov, made a great contribution to the development of Ukrainian photography. But generally, Ukrainian photography was largely reined in: The Kharkov group, photojournalists working on the government-controlled press in accordance with the required style, those who contributed to the central Moscow agencies. And all that was completely disjointed. Foreign photography was presented in rare photos exhibitions, where the list of exhibitions was rather questionable.”

So far Ukrainian photography, since breaking from the Soviet one, is highly understudied. One of the reasons Glyadelov sais is the provinciality of Ukrainian culture. “It was not a metropole, but a colony. Accordingly, many things were imitated.”

In 1989, right at the edge of the USSR era, Glyadyelov took on documentary photography. Three decades after he appeared to be one of the very few photographers to have a solid body of work on the prominent historic and humanitarian events and developments in former Soviet Republics. He has been documenting a life of socially deprived children, HIV/AIDS epidemic, tuberculosis and hepatitis C, life in prisons and in war zones.

Despite being sometimes truly horrifying and most of the time disturbing, his images are full of compassion. “I love people, they interest me. And it is at the critical moments when they are as open as can be. That is what I seek.”

He also covered several military conflicts in Nagornij Karabakh, Chechnya, was injured in the Transnistria war in 1992 and in 2014 in Donbass. Since 1997 until now Glyadyelov works in cooperation with Medecins Sans Frontieres and with their missions he traveled to the conflict zones in Somalia, Southern Sudan, Kenya, and Southern Kyrgyzstan. But actually, Glyadyelov very rarely works on assignment, and even if he does – this is not for the media, but for NGOs like UNICEF, UNAIDS, OSI, The Global Fund, ICRC, AFEW. He assigns himself to go to the places which interest him personally, be it foster houses, hospitals or battlefields.

Revolution and war in Ukraine deeply touched him and he documented Maidan extensively. He says that it changed Ukrainian photography, as it changed everything, but maybe – not enough. “War resulted in more photographers who live in the dangerous zone day to day getting images for the news, people working in the gray zone with the migrants and veterans. But is it enough, is it fully documented, explicitly covered? Of course not, it is never enough. And moreover, it happens with all long-lasting conflicts, now our war is interesting only to our own photographers. Big media and their stuff photographers follow Syria. While there are very few photographers who, like me, work on their own.”

Since the mid-90s till 2015 Glyadyelov followed the stories of abandoned kids, who were left by their mothers in the hospitals, living on the streets, about fostering houses, mental clinics, and colonies where they grew, and a few kind samaritans who stand out from a rubble of adults who just do not care. From the way the photographs are done, it is obvious that the photographer, even if for a short time, was in close and friendly relations with his subjects.

Glyadyelov has a unique memory of dates and names, he remembers all the stories of the people he photographed, even when done decades ago. And during the presentations or exhibitions, going through selected photos he gives a story about each one. “Once my friend said I am romantic, but what he called romanticism was an impossible part of 20th-century humanism.”

In 2001 Glyadyelov started one of his strongest series “Nevolia” (Captivity – eng.), shot in the prisons and colonies in Russia, Kyrgyzstan, Kazakhstan, and Ukraine, which, again, was done for Médecins Sans Frontières. This work was widely exhibited and discussed. “Horror effects, and it affects people everywhere but differently. Abroad people are likely to be shocked because they can’t believe that these kinds of prisons still exist. And in Russia, Ukraine – because there is still a hidden fear of getting into a place like that.”

This year Glyadyelov finished another big social project about people fighting Hepatitis C, also done for Médecins Sans Frontières. Some of his social projects, about kids, HIV epidemics and drug-dependence are finished and wait for exhibition. Also, the photographer still hopes to document a change, preferably – positive. Yet, as Gladyelov notes  there is a need to work on the archive and the desire to advance with other projects.

All the professional and personal encounters did not turn Glyadyelov into a cynic. “In the time and place where it seemed nothing decent could be left, such fire breaks out… Despite everything I’ve seen, I continue believing in humans.”