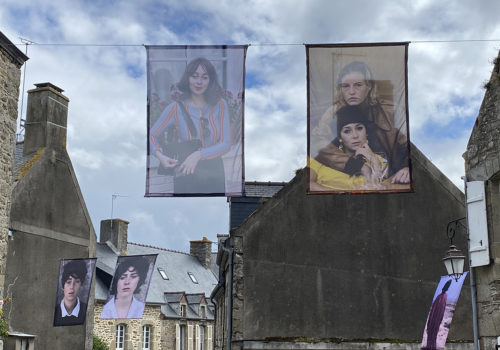 For the third year in a row, the streets and alleys of the village are transformed into a veritable open-air exhibition space during summer.

Promoting immersion in a unique artistic universe, this discovery trail of contemporary art unfolds on nearly forty flags adorning the streets, projecting the town into a new atmosphere resembling an open-air cinema!

The duo Elsa & Johanna, invited to invest this atypical creative space, takes us on an expedition built on the border between reality and fiction.

Like Thelma & Louise or Les Demoiselles de Rochefort, Elsa & Johanna form a duo that resembles film heroines. Taking turns embodying the roles of women, men, young adolescents, housewives, couples, the two artists transfigure everyday life by subtly shifting from one side of the lens to the other. Every detail of their body, their clothes, their decorations has been meticulously worked on in order to allow possible identification or social recognition, while creating confusion and ambiguity.

In the skin of others, the artists slip into one body with different identities and plunge us, in cinemascope format, into the sincerity of banality. Far beyond caricature, the characters embodied by the duo refer to a timeless form of memory, where the figures bring each other to life.

United in 2004, Johanna Benaïnous (1991) and Elsa Parra (1990) form a duo of visual artists, photographers and directors. Together, they obtained the congratulations of the jury of the École Nationale Supérieure des Beaux-Arts de Paris in 2015. Finalists for the HSBC Prize for Photography in 2016, Elsa & Johanna won the Audience Prize at the 2019 Hyères International Festival in the photography section and were finalists for the Louis Roederer Discovery Prize for the Rencontres d’Arles 2020.

An edition of the 88 prints from the A Couple of Them series was acquired by the FMAC (Municipal Fund of Contemporary Art) of Paris in 2018.

The MAC / VAL presents their works within the framework of the exhibition “Lines of Lives, a legendary exhibition”, in 2019, and, in the same year, they were finalists of the Hyères Festival 2019. Elsa & Johanna are selected by Osei Bonsu, curator of modern and contemporary African art at Tate Modern in London, to participate in the Curiosade Paris Photo 2019 Sector with a solo show on the stand of Galerie La Forest Divonne.

In 2020, they were selected to participate in the Rencontres Photographiques d´Arles and were finalists for the Louis Roederer Discovery Prize, and the same year, they entered the Contemporary Art Collection of Société Générale. They realized a carte blanche commission for the Palais de la Découverte and were part of the exhibition “Staging Identity” at the MathildenhöheInstitut in Darmstadt alongside Pipilotti Rist and Cindy Shermann.

In November 2021 they are invited by the Städtische Galerie in Karlsruhe to present their first solo museum exhibition.

The La Forest Divonne Paris + Brussels gallery has been representing their work since 2016.

The coming future is very rich for Elsa & Johanna, in addition to the release of their first book, with, in particular the personal exhibition of a new series, that the gallery La Forest Divonne will dedicate to them in its space rue des Beaux-Arts in Paris from November 2 to December 23.

In the streets of Saint-Briac